All About Heirloom Beans and How to Make The Perfect Pot

All About Heirloom Beans and How to Make The Perfect Pot The humble bean has experienced something of a renaissance in the past two years, when consumers cleared pantry staples from supermarket shelves with apocalyptic fury.

A pot of freshly cooked beans is insurance against fits of hunger, an inspirational jumping-off point for a myriad of recipes, or a meal in and of itself. Combining the little legume with water and salt to make something greater than the sum of its parts is a comforting act of self care and a sure bet in the face of anxious uncertainty. Try it when you feel adrift: both the cooking and the consuming have a grounding effect. Something about the humble staple can feel almost luxurious; for the home cook, buying a fancy variety of beans is good for the soul, like treating yourself to fresh flowers or an expertly made espresso.

Our offering of Heirloom Beans is a natural extension of our efforts to source Heirloom Corn from Mexico. Many of the corn farmers who we work with also grow beans, either in a "three sisters" style of milpa farming or as a rotational crop that helps replenish the nutrients in the soil that corn and other crops can deplete. They're kind of an agricultural yin and yang. They're also a yin and yang on your plate! What masa-centric meal is not made better by a tender bowl of frijoles? We are proud to wear the jersey of Team Bean. Read on for a primer on heirloom beans and our best tips for preparing them.


What are heirloom beans?

First cultivated over 10,000 years ago in Mexico, dry beans are a crop that has sustained communities across the globe for centuries. Heirloom beans, like your grandmother’s jewels, are passed down through generations by families or farms. Seeds from the best crops are selected and replanted for centuries within a community, resulting in a huge variety of plant-based protein powerhouses in a rainbow of colors, with unmatched flavor and texture. The seeds are reliably pure, producing a dependably delicious result with every harvest. And rest assured, heirloom beans are never hybrid or genetically modified (GMO). 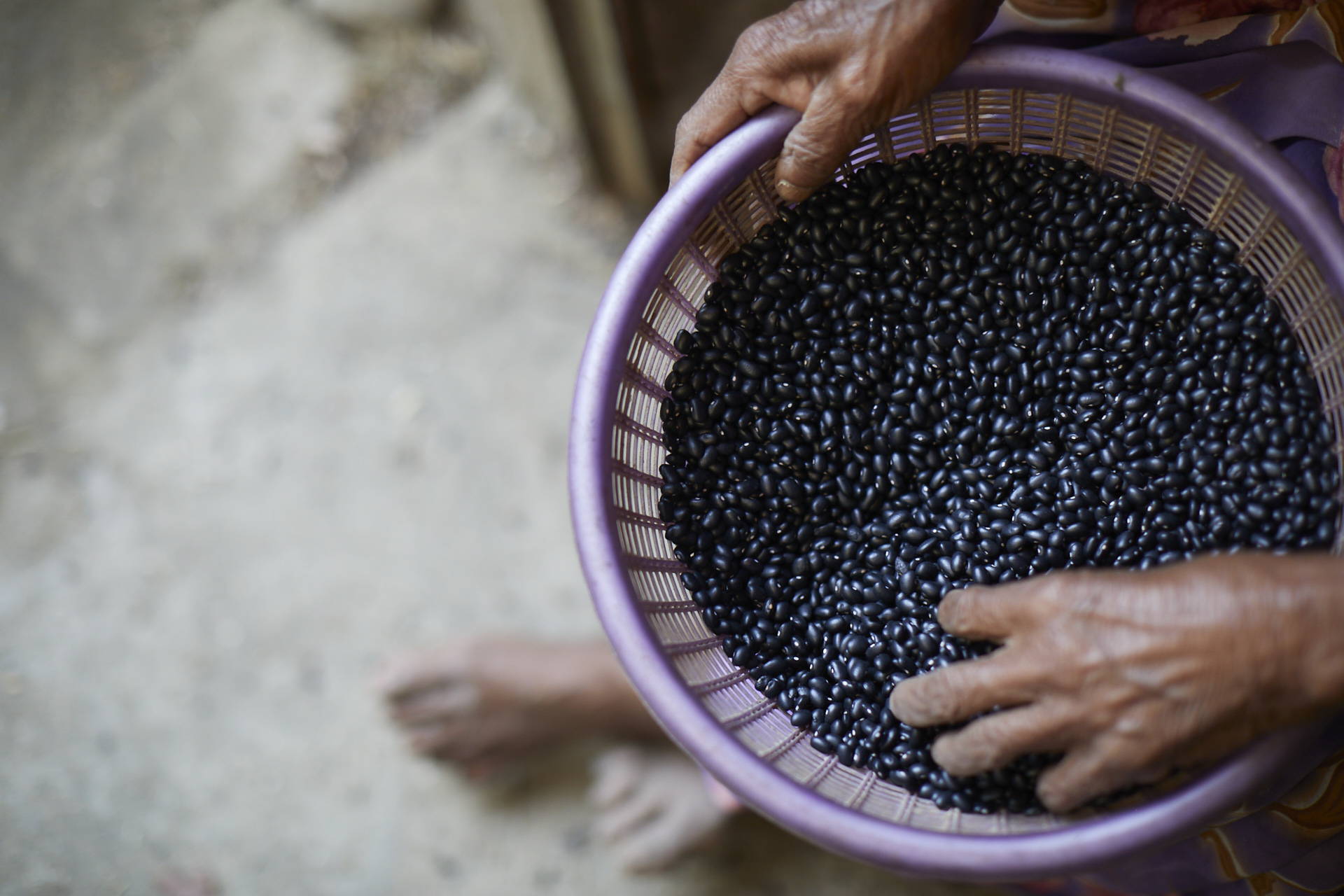 What separates the good from the great, and why is it worth seeking out heirloom beans?

1. Freshness
At Masienda, we source unique varieties of Heirloom Beans like Chatino Black Beans, Bayo Beans, Amarillo Beans, Mantequilla Beans and Ayocote Pinto Beans from small farms throughout Mexico. These are legumes that have been harvested and dried within the past year, as opposed to the beans that may have been sitting on supermarket shelves for far longer — in some cases, up to ten years! In the US, commodity farmers grow the varieties which are most shelf stable and disease resistant, producing greater yields. Smaller yields mean beans that cook faster and more evenly, producing a creamier, less mealy texture. Because they’re fresher, they’re also easier to digest — no need to worry about that “magical fruit” business.

2. Flavor
Heirloom beans simply taste better, and may be better for you, too. The industrialization of modern farming made produce cheaper and more uniform, but also, unfortunately, less delicious and nutritious, as older beans start to lose vitamin content and flavor. Heirloom strains are richer in color and have a more complex, pronounced and almost meaty flavor than their mass-produced cousins, which tend to have a more uniform blandness.

3. Environment
Similar to corn, the market values quantity over quality: by buying heirloom beans, you’re not only guaranteeing a tastier end product, but you’re doing your part to preserve a crop that might otherwise be endangered. Because an entire row of these plants may only yield a few pods, commercial growers don’t tend to grow heirloom beans. They’re challenging in part because heirloom crops are open pollinated, meaning the process happens naturally. These protein powerhouses also act as a companion crop to corn and add nitrogen to the soil – they’re basically an organic fertilizer.

Why do corn and beans go hand in hand?

These nutritional heavy hitters have a symbiotic relationship. The complementary cultivation of corn, beans and squash is sometimes known as the “three sisters” of agriculture — the milpa, in Spanish. Derived from the Nahuatl words milli (“cultivated land”) and pan (“in”), milpa refers to both a traditional Mesoamerican corn field as well as the companion planting of corn, beans, and squash to balance the nutrients in the soil. When grown together, each plant fosters sustainable soil health, and when consumed together, they constitute a fully balanced diet.

To soak or not to soak?

This is a hill some cooks are willing to die on, swearing that soaking can eliminate some of beans' gaseous properties and yields a more tender, even bite. But in our opinion, soaking mostly just makes beans cook faster. If you've got a craving and didn't think to soak your beans yesterday, there's no need to fret: just plan for a little extra time on the stove. If you do like to plan ahead, rinse your beans in a colander and check for any clumps of dirt or debris, then soak them in a bowl covered by about an inch of water, anywhere from a couple of hours to overnight. You can also try the quick soak method: cover your beans in just-boiled water for an hour.

Some believe that tossing the soaking water and rinsing the beans cuts down on gas, while others swear that the soaking water holds crucial flavor and vitamins. We'll let you choose your camp, and in either case, make sure you add enough water in the pot you transfer your beans to so they're covered by at least two inches of water (or more). 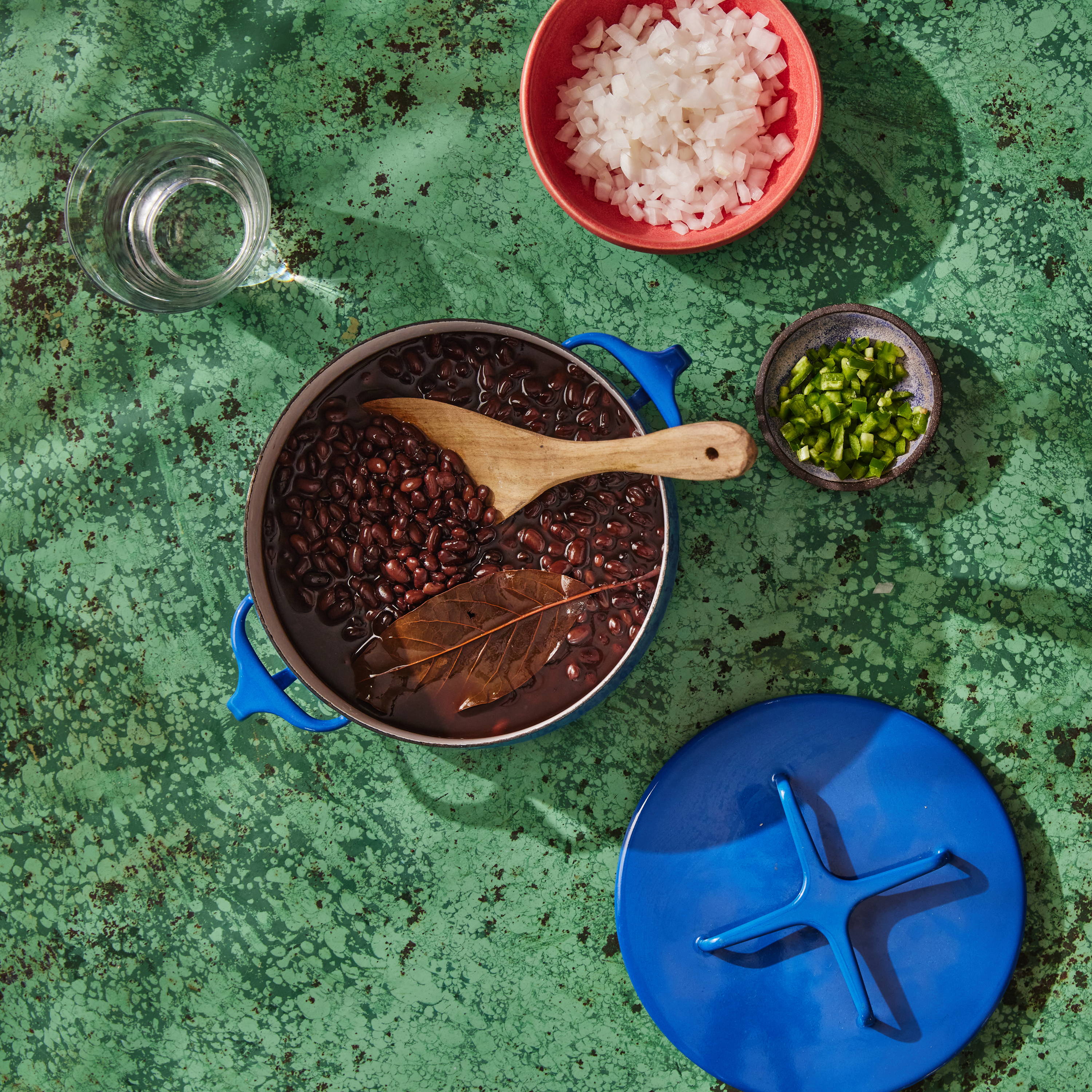 How to prepare a perfect pot of beans...

These beautiful heirloom beans don’t need a lot of extra ingredients: the basics of dried beans, water and salt are all you need to get started.

Take your beans to the next level:

At the cooking stage, you may choose to supplement or replace your cooking water with chicken, beef stock or vegetable stock for an added flavor punch. Take a page out of the Southern cooking handbook by tossing in a ham bone at the boiling stage. Before adding beans to your pot, you can experiment with sauteeing onions, garlic, celery or carrots (finely chopped like a mirepoix, or in large chunks) in a bit of olive oil or lard – the more browning you get here, the more depth of flavor your broth will take on. At this point, you can throw in a dried or fresh chile, toasted Avocado Leaves (about two per pound of beans) for a unique anise flavor, or a few sprigs of hard herbs like rosemary, thyme or oregano and then add your beans and water. If you’d like to add a sprig or two of fresh or dried epazote, an astringent-tasting herb native to Mexico and Guatemala that’s used in bean cooking to flavor and reduce gas, do so near the end of cooking to get the most flavor from the herb. Any acidic ingredients, like lime or tomato, should wait until the beans are fully cooked. A simple pot of beans is your blank canvas!

Bored of your basic pot of beans?

Frijoles de olla, or your classic pot of beans, are a jumping-off point for all kinds of incredible dishes. Serve them over a thick, crusty piece of toast with a bit of their cooking liquid, an extra glug of olive oil and a sprinkle of flaky salt. Option to add a jammy egg or some crumbled queso fresco.

After some cool-down time in the fridge, throw your beans into a summer salad with chopped onions, tomatoes and corn and a bright, acidic dressing.

Whiz them into a dip with Greek yogurt or sour cream, plenty of cheese and green chiles — don’t forget the tortilla chips!

Beans are a natural accompaniment to masa preparations of all kinds. Refry and use them in one of many masa shapes - tlyayudas, tostadas, panuchos, huaraches, tlacoyos, memelas, tetelas, quesadillas or tacos are all excellent vehicles for nature’s perfect protein.

We're not the only ones crazy about beans. In our first ever episode of "In The Kitchen With", Chef Fermín Núñez of Suerte Restaurant in Austin, Texas, walks us through his favorite recipe for enfrijoladas, or bean-drenched tortillas.

Looking for Wholesale Heirloom Beans? We've got you covered. TESTING ONE TWO THREE