If you're a corn devotee, Mexico City is like Willy Wonka's factory. This is the city of masa, in all its glory and its many colors and shapes. On the street or in a restaurant, your fix of Vitamina T (tacos, tamales, tlayudas, tetelas, tortas and more) is always close at hand.

For the last fifty+ years, many Mexico City residents were resigned to purchasing uniformly white, bland tortillas short on flavor and texture (thanks to inexpensive masa harina made from imported commodity corn), that barely resembled the staple made from the more than 60 strains of native corn in varying colors and shapes found in rural areas (thanks, NAFTA).

But luckily, over the past few years, a number of Mexico City-based chefs and tortilleria owners are fighting to preserve the country’s cherished crop and the livelihood of small farmers across Mexico. The delicious result? Mexico City residents and visitors alike can enjoy a myriad of dishes that begin with fresh, native corn nixtamalized in the traditional way.

Some of us at Masienda have had the pleasure of living in the vibrant capital city—some still do—while others make a point to travel there as often as possible, and when we go, corn is always at the crux of our itineraries. This is a list of our favorite places to enjoy the versatility and variety of Mexico’s native corn in all its glory and myriad forms.

A note on responsible tourism:

The pandemic-driven remote worker boom and digital nomad culture has resulted in an exponential increase in tourism to the capital. Locals and longtime residents have mixed feelings about this change, as they experience rent inflation and evictions. To visit responsibly, we recommend doing a bit of homework: aim to learn some basic Spanish rather than assuming waiters, baristas and Uber drivers will understand English. Respect and educate yourself on the local customs: shorts are considered inappropriate, no matter the weather; arriving early or even on time for an engagement is unusual and might be construed as rude; and respect masking customs. The Good Guest Collective, an organization consisting of expats and locals, was formed in response to overtourism, with the goal of informing guests of norms so they can be mindful, ethical visitors. 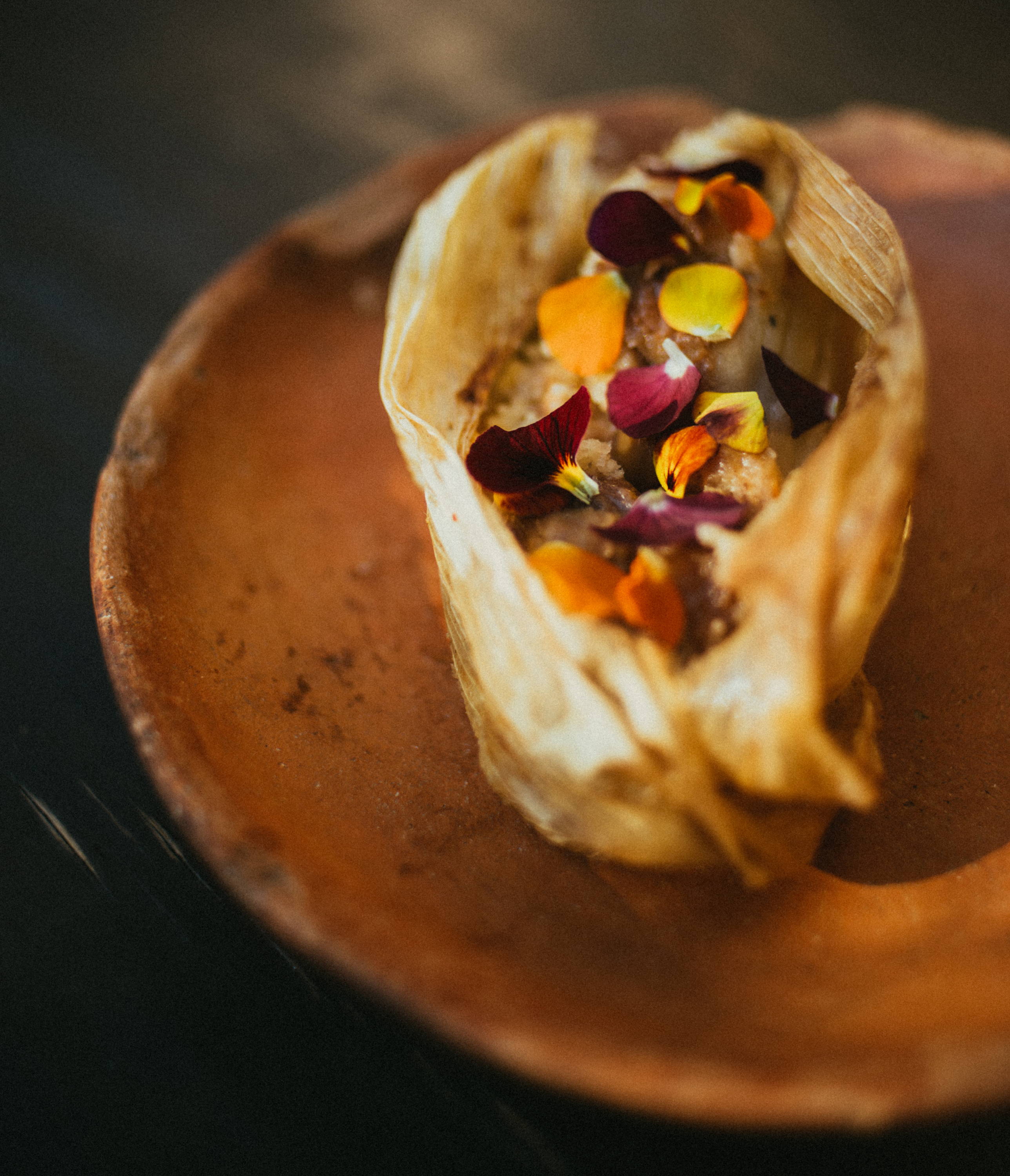 No menu, ever-changing food courses and desserts with corn at their core, served from a rustic open kitchen. Chef and owner Jesus Tornés sources many of the ingredients he cooks with from his own farm or the surrounding land in his native Guerrero. It’s a dining experience unlike any other, and a true love letter to the heirloom corn they source, nixtamalize and grind in-house.

Nicos, run by the chef who started the Mexico chapter of the Slow Food movement, is one of the most casually elegant meals you can have in the capital. Go for comida (late lunch) and don’t miss the sopa seca de nata (layers of paper-thin crepes filled with tomato and cream), guacamole made at your table with the chewiest, richest tortillas made from corn nixtamalized in-house, and a cafe de olla.
Image credit @nicosmexico 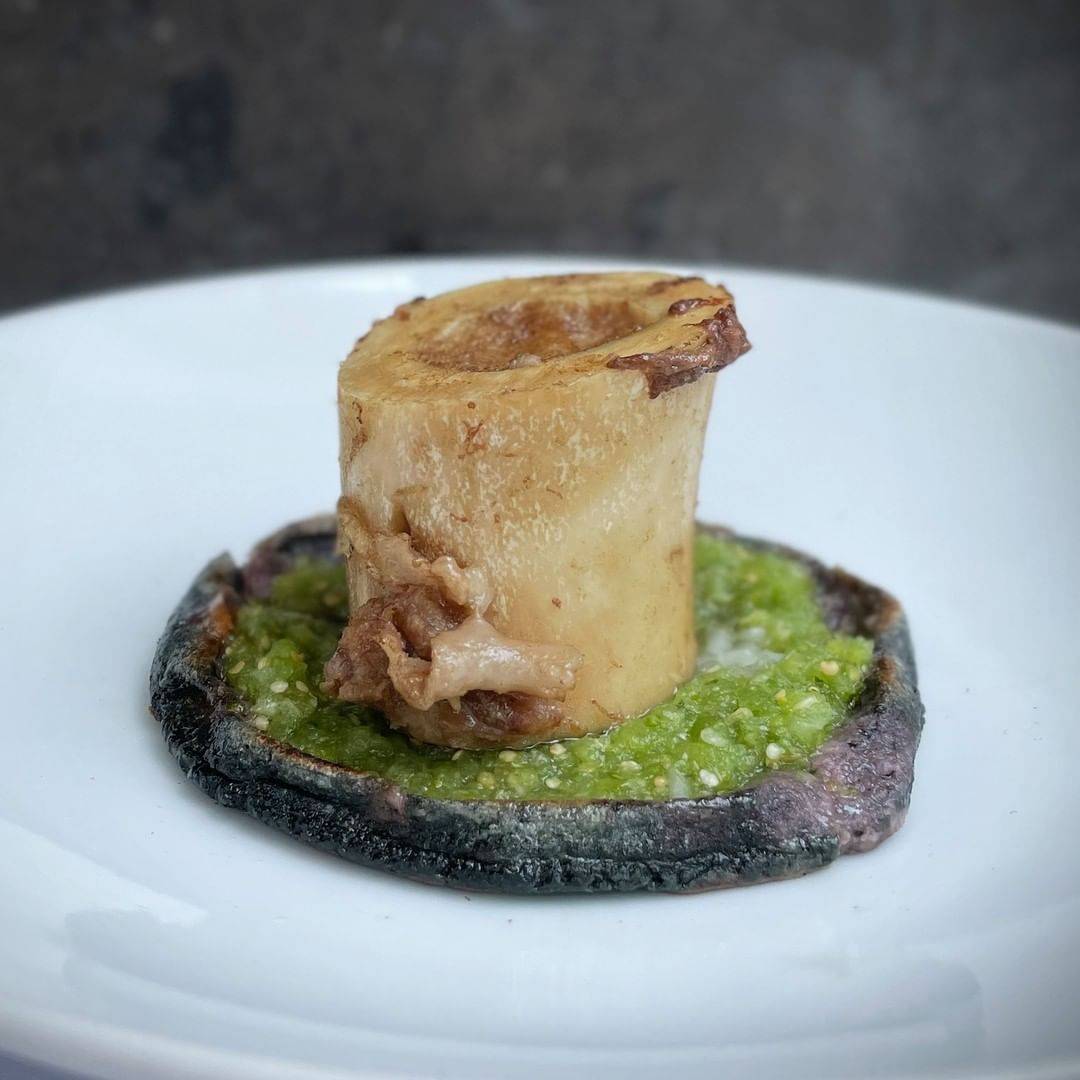 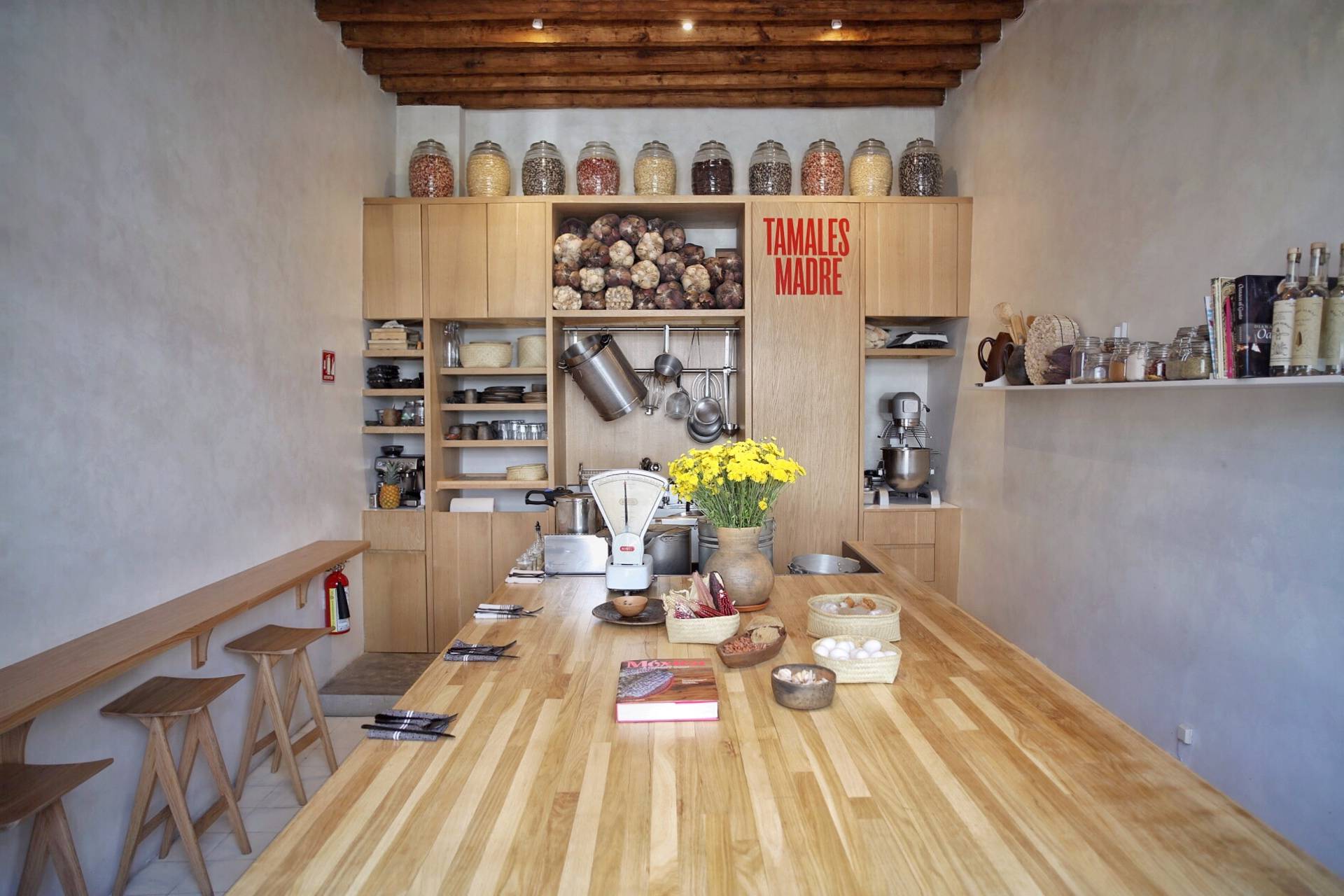 Sweet and savory artisanal tamales made from native corn, along with corn-based beverages like atole and corn beer, in an educational atmosphere.

Located in the tony Polanco neighborhood, this moody, dramatic Enrique Olvera-backed agave bar and Oaxacan restaurant (named one of the World's 50 Best) serves a vegetarian and pescaterian menu, heavy on the snack-style bites, with unique masa shapes like memelas, tetelas, tlayudas, and more. 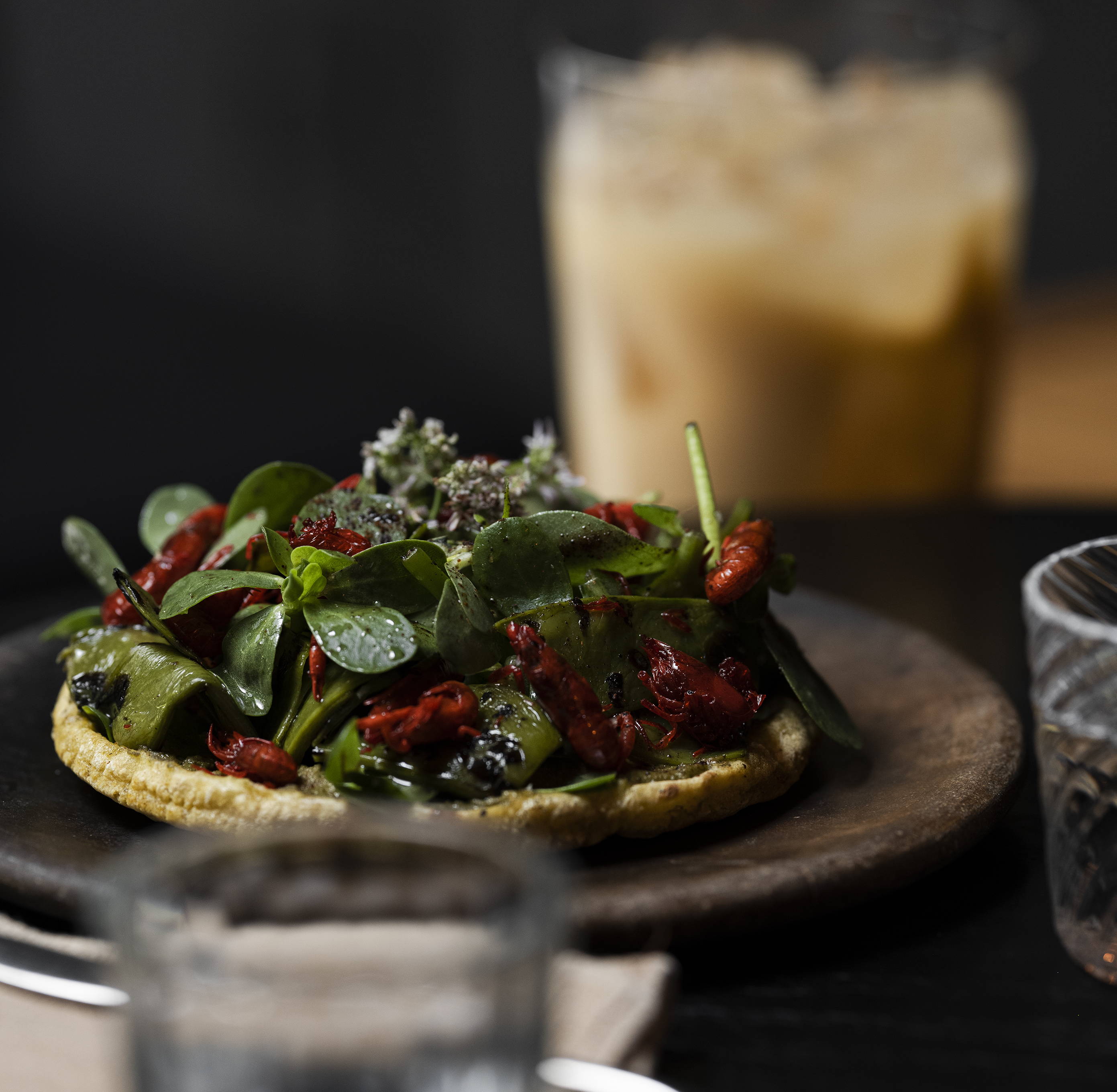 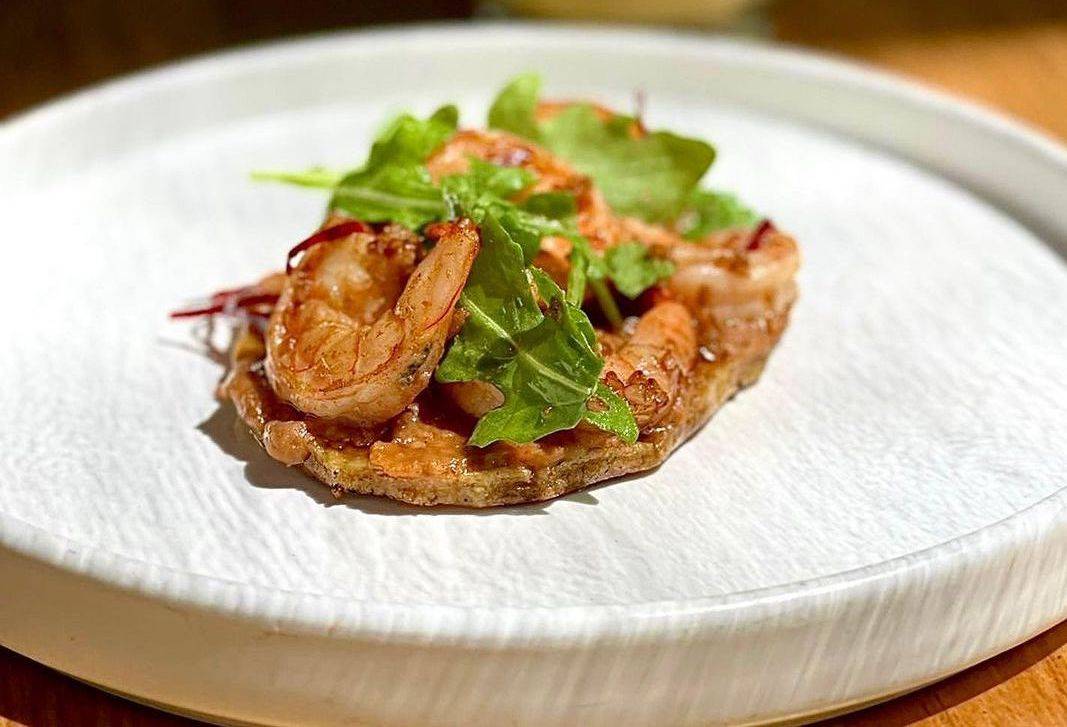 This elegant, sit-down restaurant run by acclaimed chef Ricardo Muñoz Zurita features regional dishes from all around Mexico, some of which are quite obscure. Their selection of moles is particularly noteworthy, and the tortillas are all made by hand in the open comal at the front of the restaurant.
Image credit azul.rest 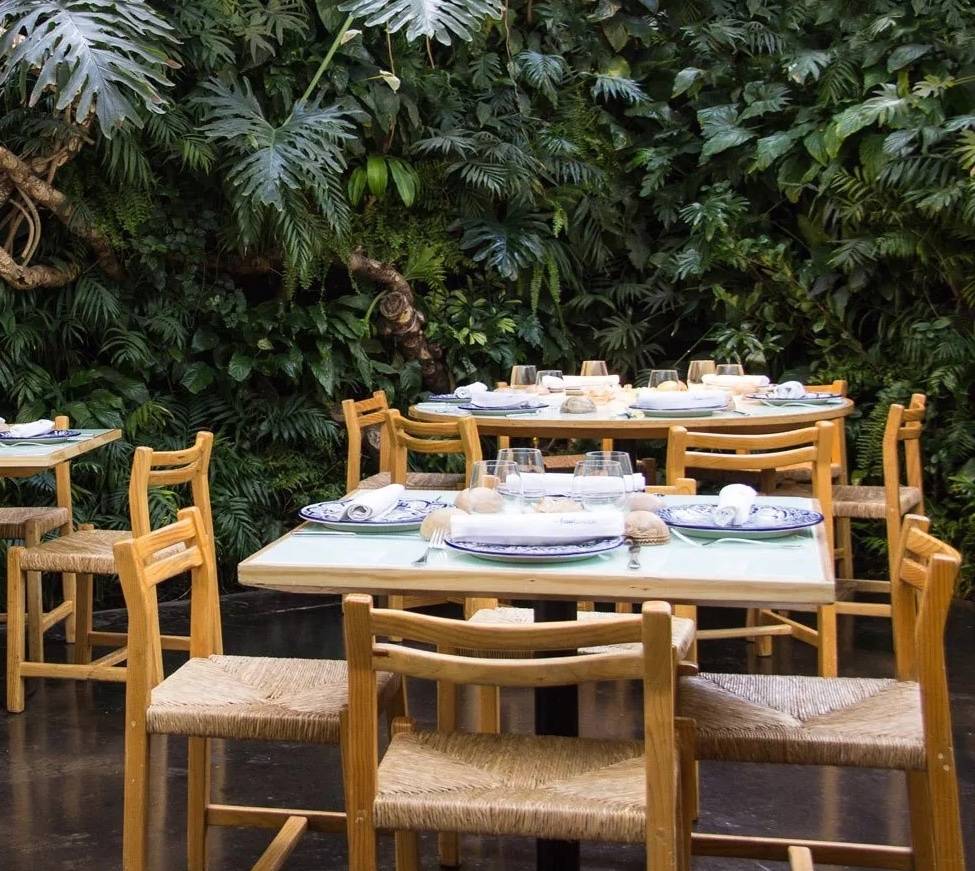 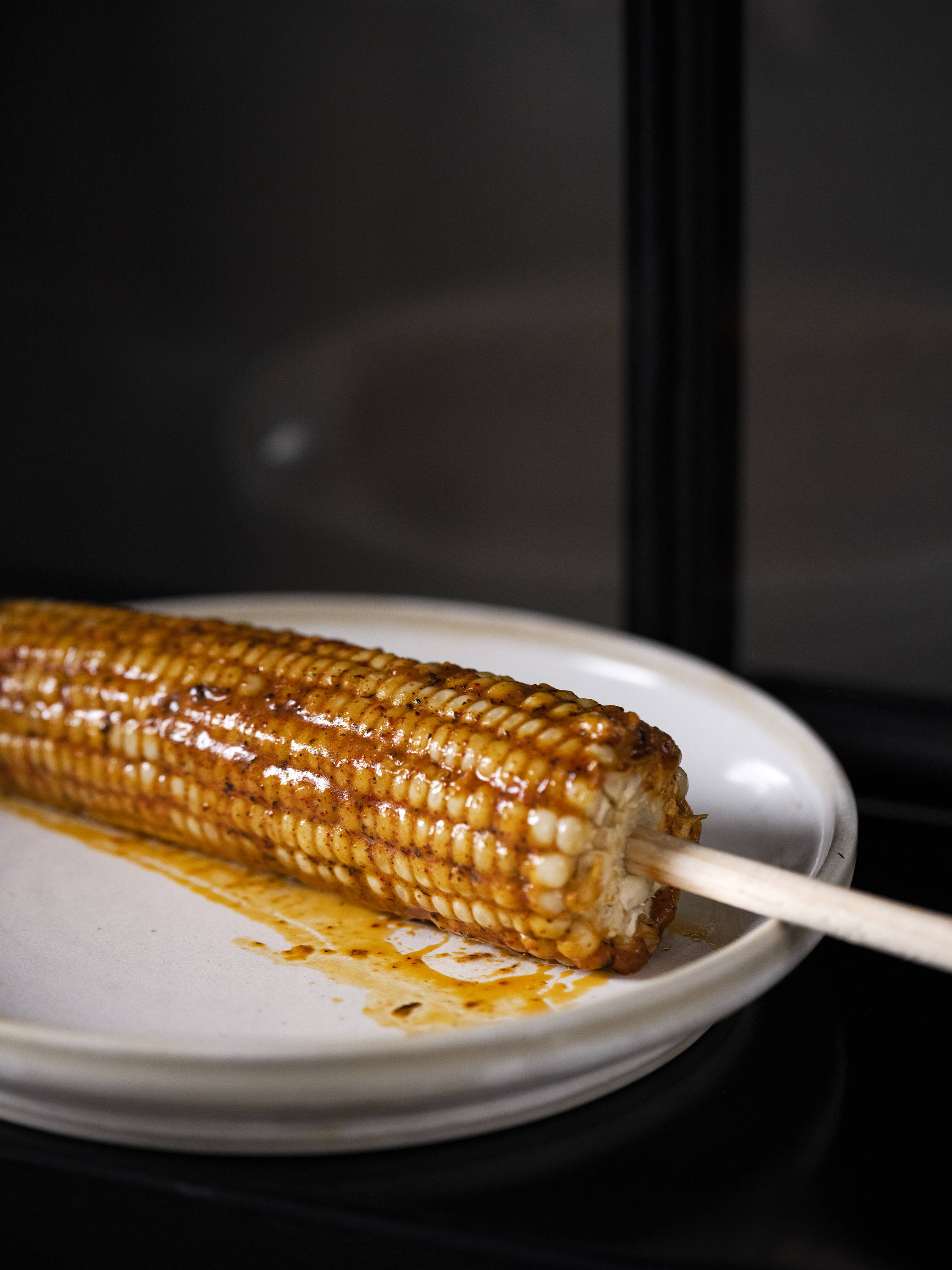 At Chef Enrique Olvera's modern molino, you can have your corn ground right in front of you, or pick up packs of fresh heirloom tortillas, dried beans and jars of salsa. Their small sit-down café offers vegetarian lunch options like tamales, tacos de huitlacoche, chilaquiles, and a supersized take on Pujol’s infamous baby heirloom corn with chicatana mayo. Finish the meal with an agua de maíz or a pink corn concha.

Heirloom corn tortillas made fresh on a clay comal using heirloom yellow, white, blue and red corn, alongside Mexican coffee and pantry products from all around the country. They also make sopes, tlacoyos, quesadillas and tacos on the comal that you can sit and enjoy there.
Image credit @ecosentli_cdmx 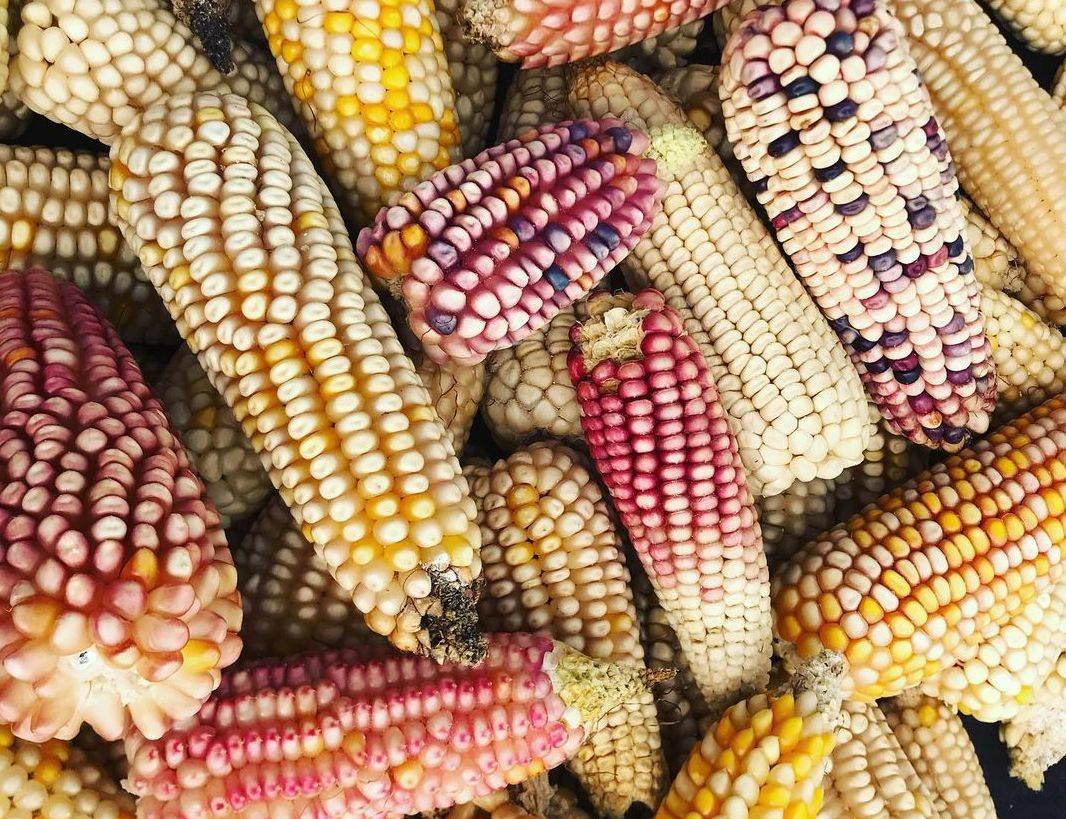 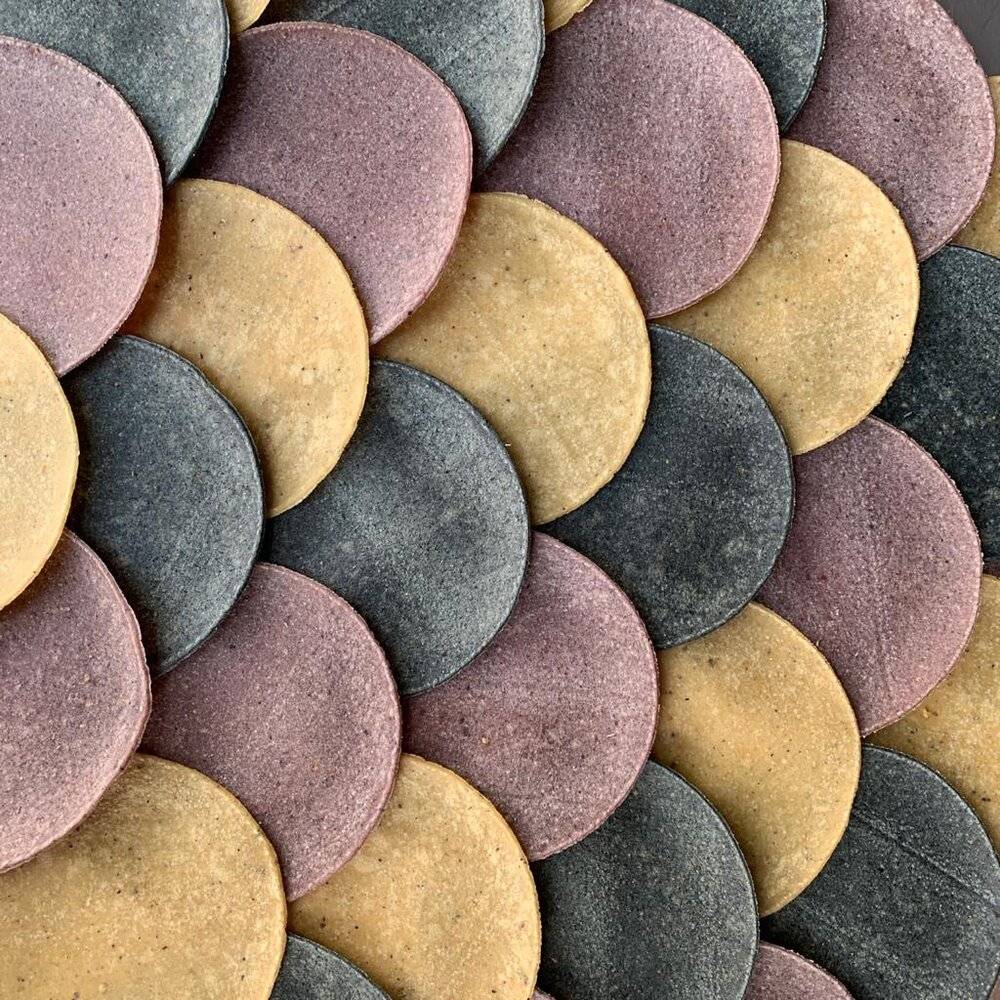 This tortillería cofounded by chefs operated and owned by Santiago Muñoz and Daniela Moreno makes mini gorditas de suadero, tlacoyos and more, all from native corn sourced directly from farmers across the country. They’ll deliver to your door (order online or via Whatsapp) and have a warehouse in Azcapotzalco that supplies about 70 restaurants in CDMX.
Image credit maizajo.com

Come to the tony Polanco neighborhood for a kilo of their delicious, nixtamalized heirloom tortillas to take home, but stay for the tacos, quesadillas and tlacoyos they make to order.
Image credit @siembratortilleria 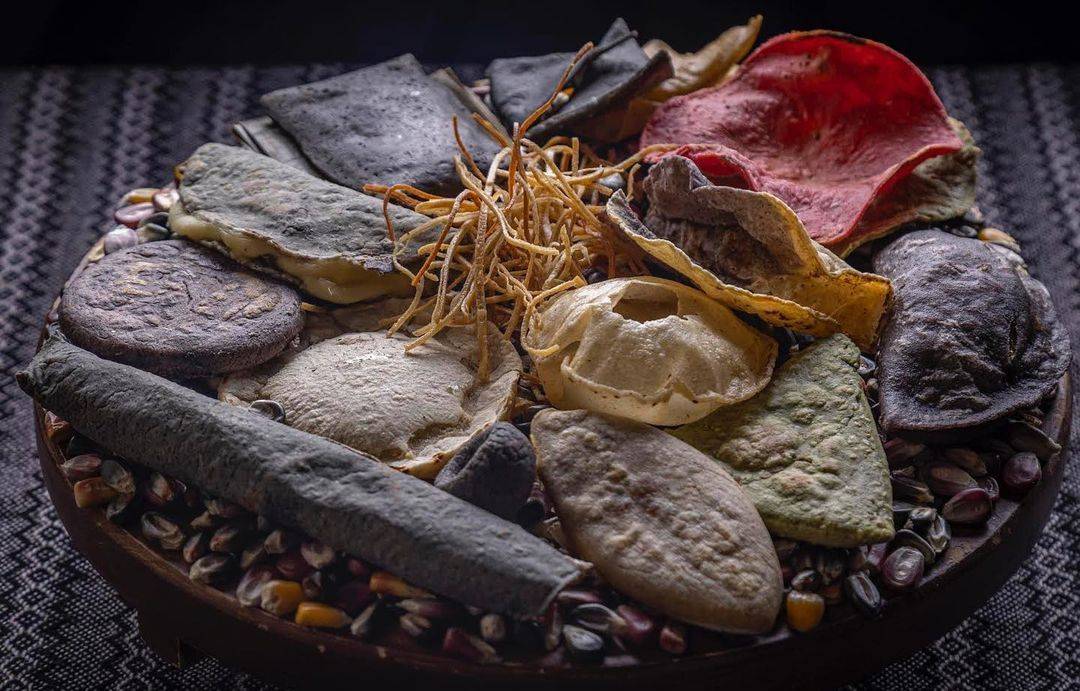 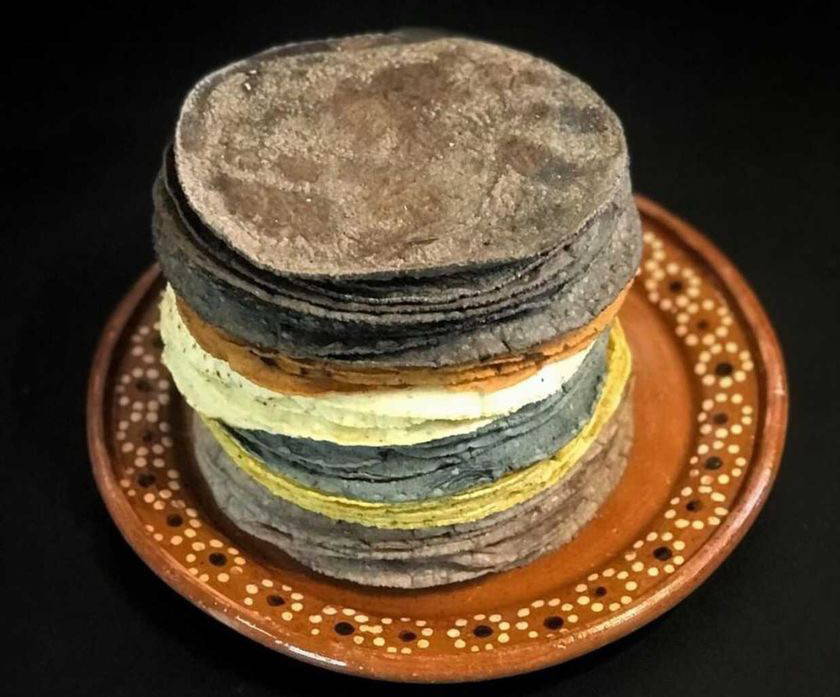 This tortillería sources most of its corn from small farms in Tlaxcala, and sells to restaurants and hotels, but if you swing by their space in Mixcoac, you can buy fresh tortillas or masa in a rainbow of colors, along with Mexican cheese. Their quesadillas are available for delivery.

Watch tortillas being made from nixtamal to masa at this organic tortilleria in Roma Norte, where you can also enjoy enchiladas, tamales, atole and more corn-based dishes. Cintli’s tortillas are made from three types of Tlaxcala corn; some incorporate unique ingredients like amaranth.
Image credit @cintlitortilleria 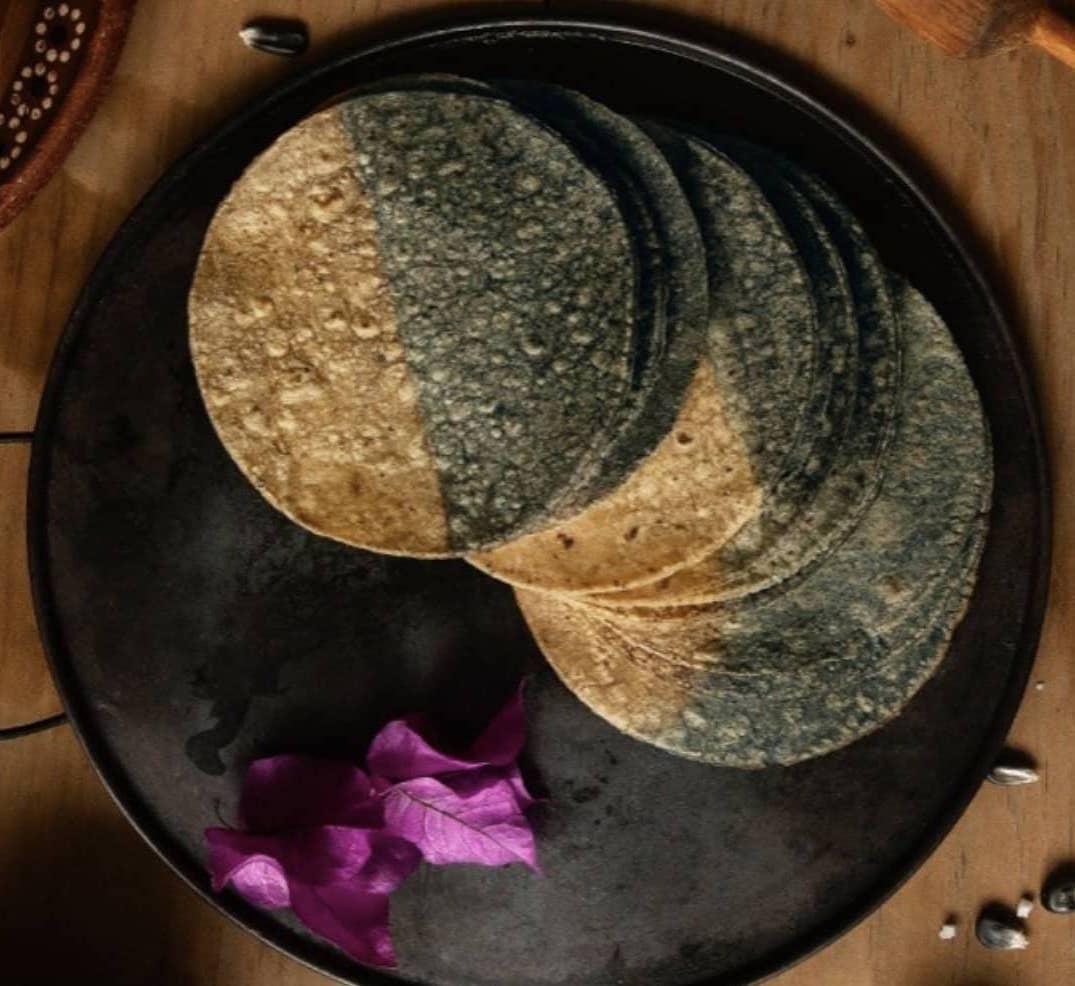 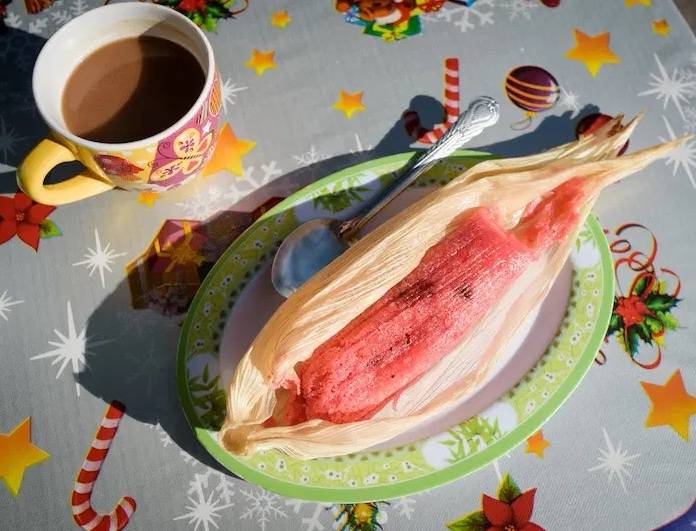 The line starts forming at 11am at Roma Norte’s most popular quesadilla stand, on the corner of Colima and Merida. These are Mexican quesadillas, which are big and not always cheese-filled. Made with blue corn tortillas, they're filled with meat or veggies (the quelites and flor de calabaza are favorites) and optional cheese.
Image credit Foursquare user Hannah B. 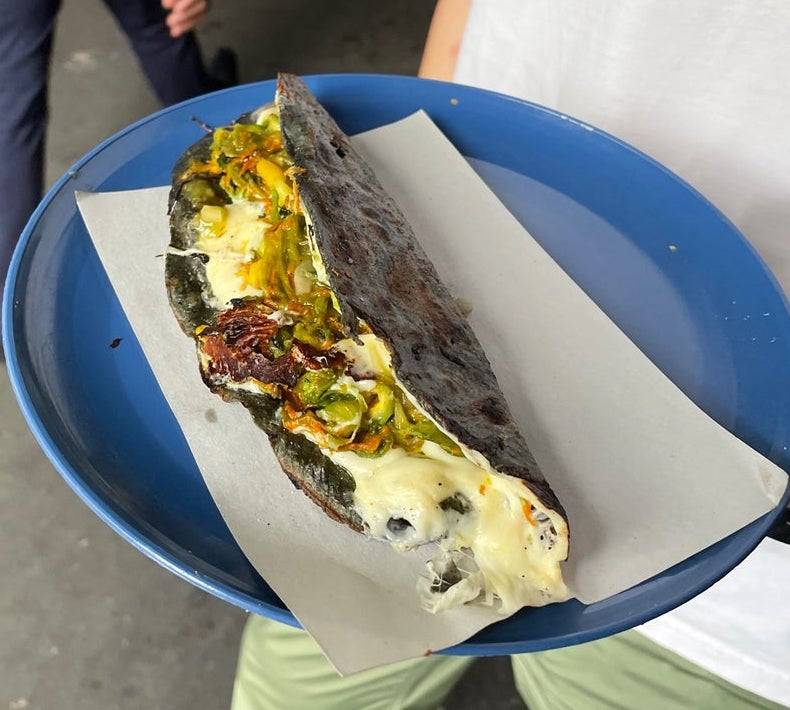 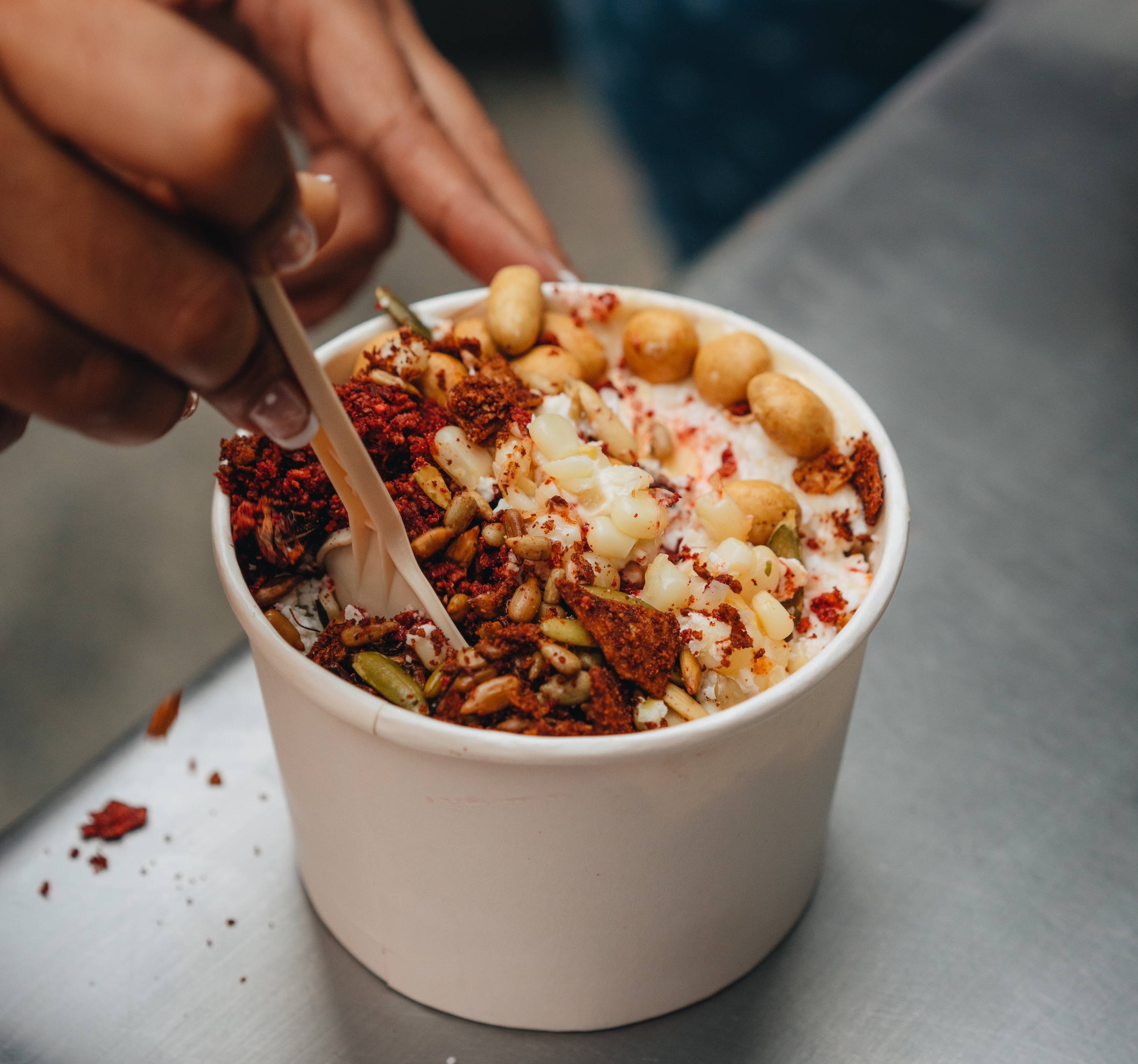 This street-side stand in Roma Norte sells esquites, elotes and tlayudas, all made made with local corn. If you still haven't satisfied your antojo for corn, you can wash down your snack with a refreshing horchata de maiz. Esquites Durango is fast becoming a crowd magnet, so be prepared to wait in line.

This is the preferred market for chefs. Go with a big bag for ingredients to bring home or cook at your Airbnb like huitlacoche, dried chiles, vanilla, mole paste, edible insects and more. If you’re looking for fresh fish or wild game meat, you can find it all, even some you’d never imagine (iguana, wild pig, scorpion and more). The puestos towards the front of the market are great for breakfast.
Image credit Tripadvisor user Andres C 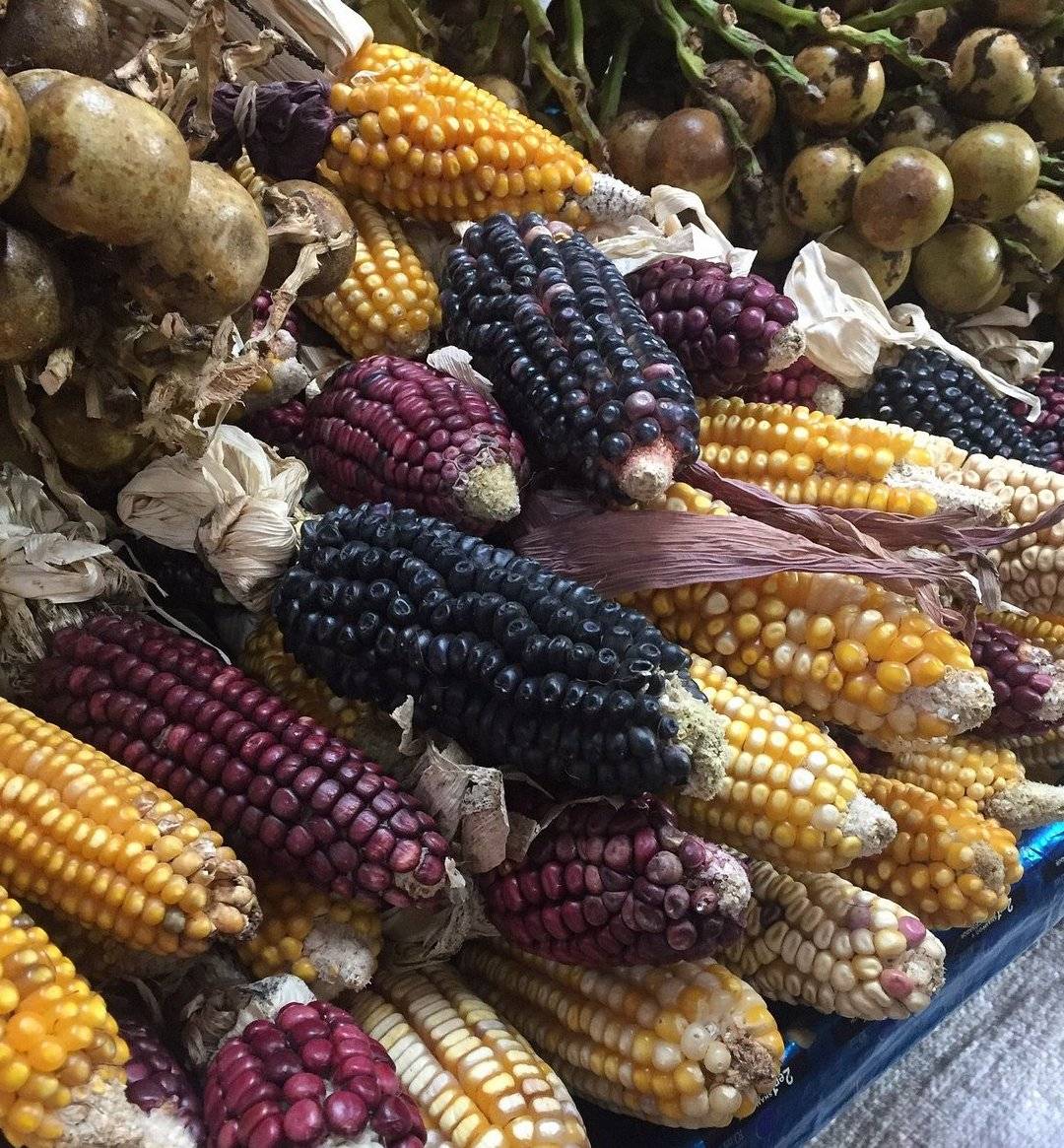 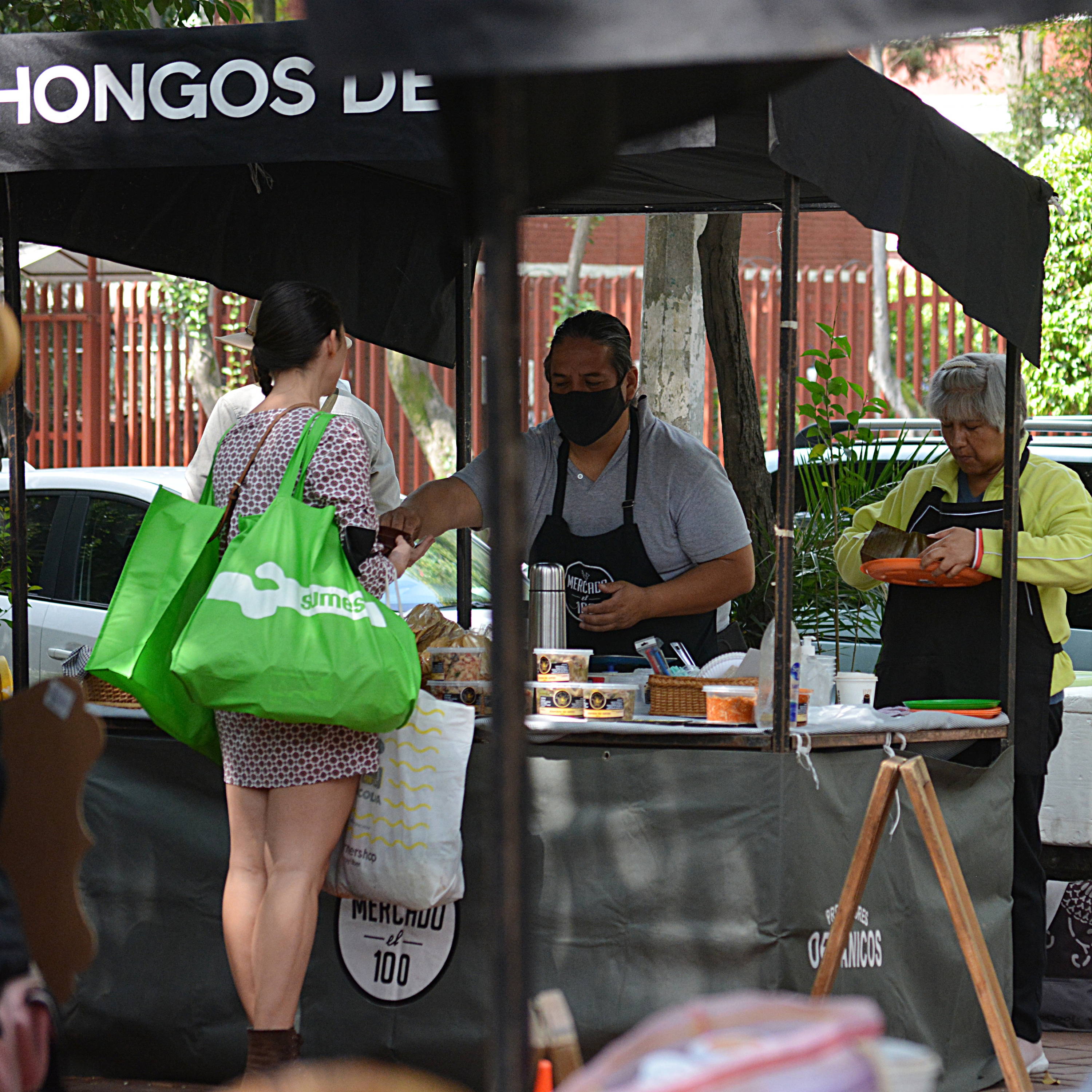 This Sunday market in Roma Sur is more like a US-style farmer’s market than a typical Mexican mercado—everything is local and organic. Go for the incredible variety of produce as well as the prepared food (the mushroom tamales wrapped in banana leaves are particularly noteworthy).

This wholesale flower market has a number of wonderful food stalls, including Elotes Correa, who sells cacahuazintle asado along with a variety of esquites.
Image credit Tripadvisor user Saibal S 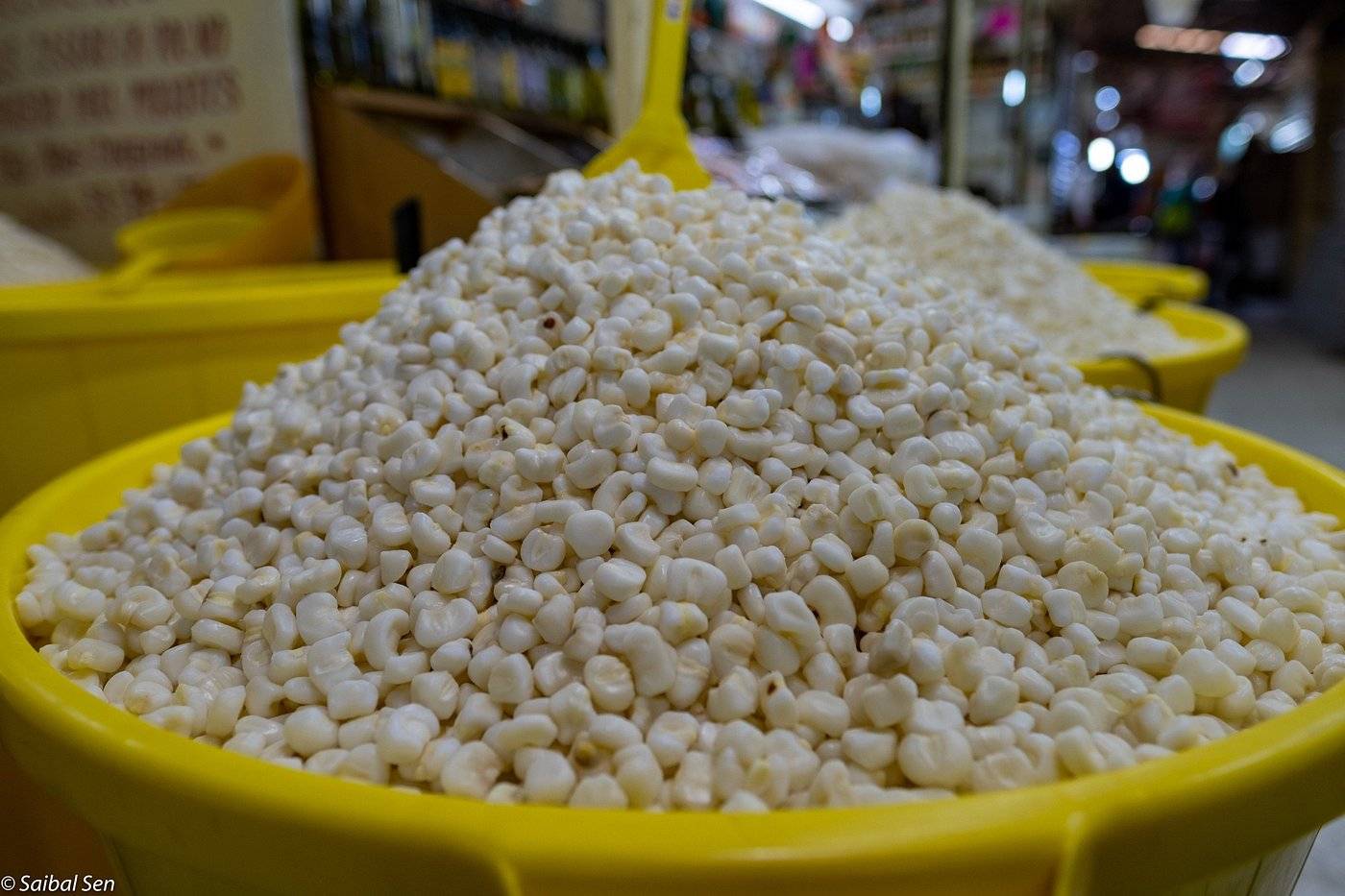 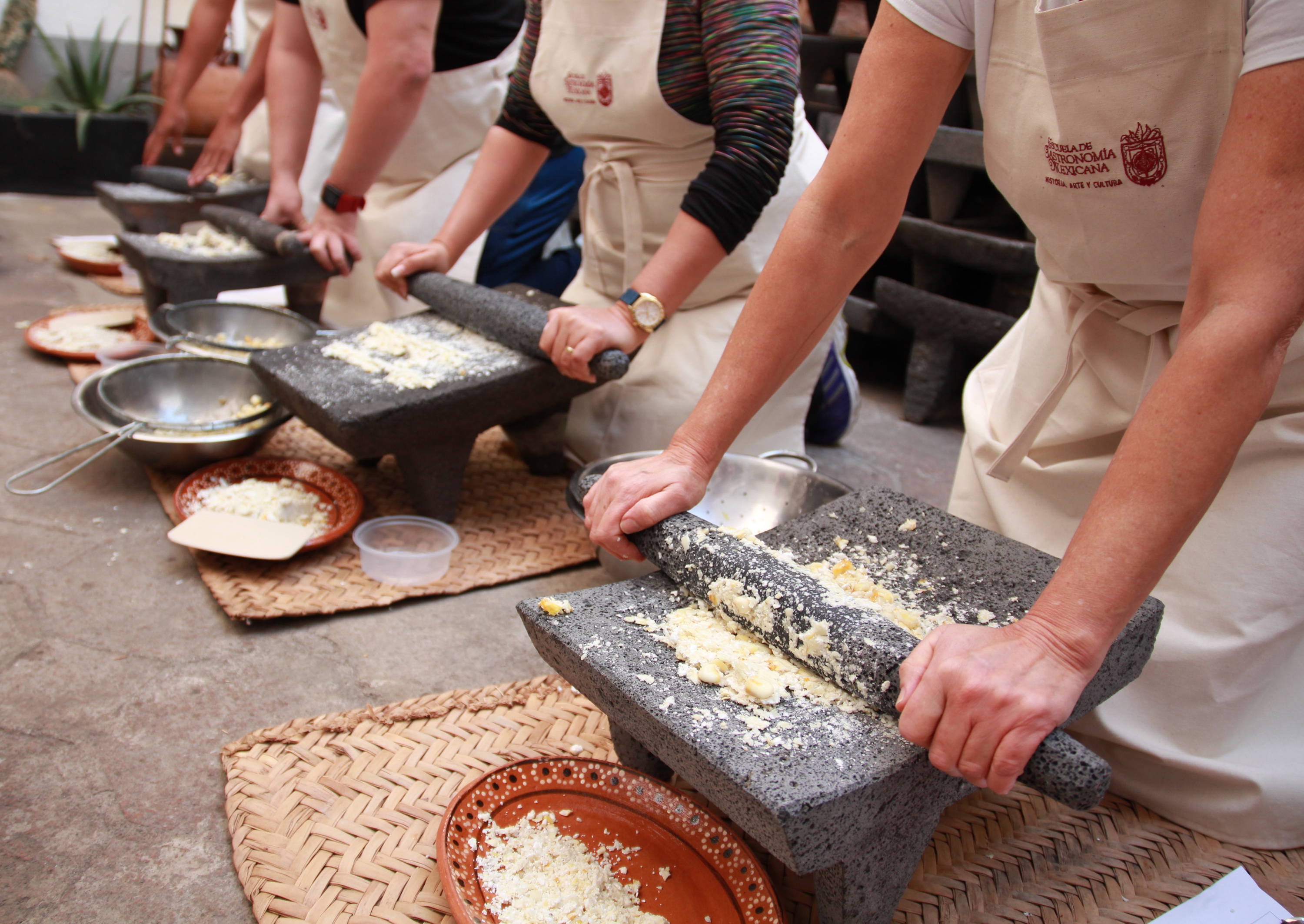 La Escuela de Gastronomía Mexicana is the world’s only culinary school dedicated exclusively to Mexican cooking techniques. They offer five-week courses and shorter-term workshops on a range of topics including Prehispanic Cuisine, where you’ll learn to grind corn by hand on a metate.

Eat Mexico is one of Mexico City’s best street food tours, started by food writer and former expat Lesley Téllez. Choose from a variety of walking tours based on neighborhoods, markets or specific types of street food.
Image credit @eatmexico 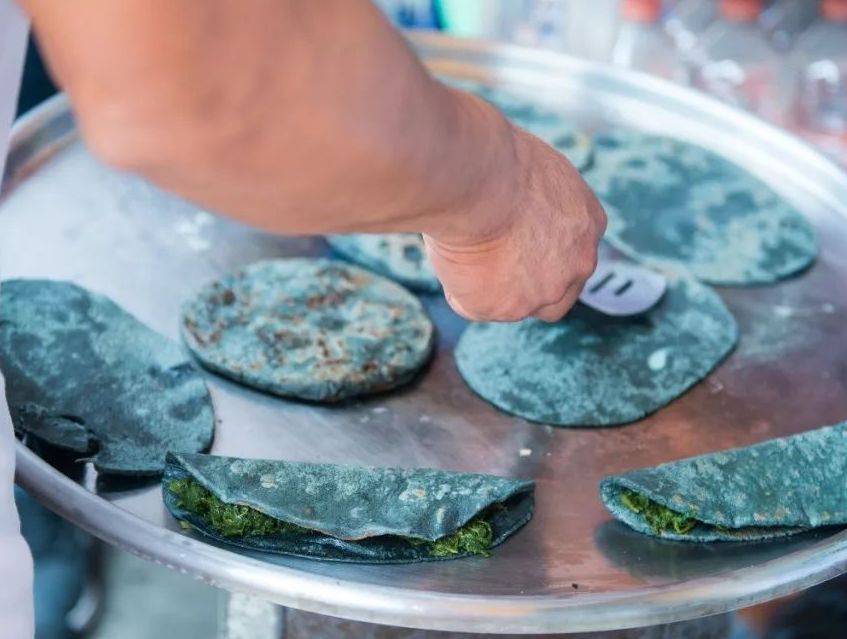 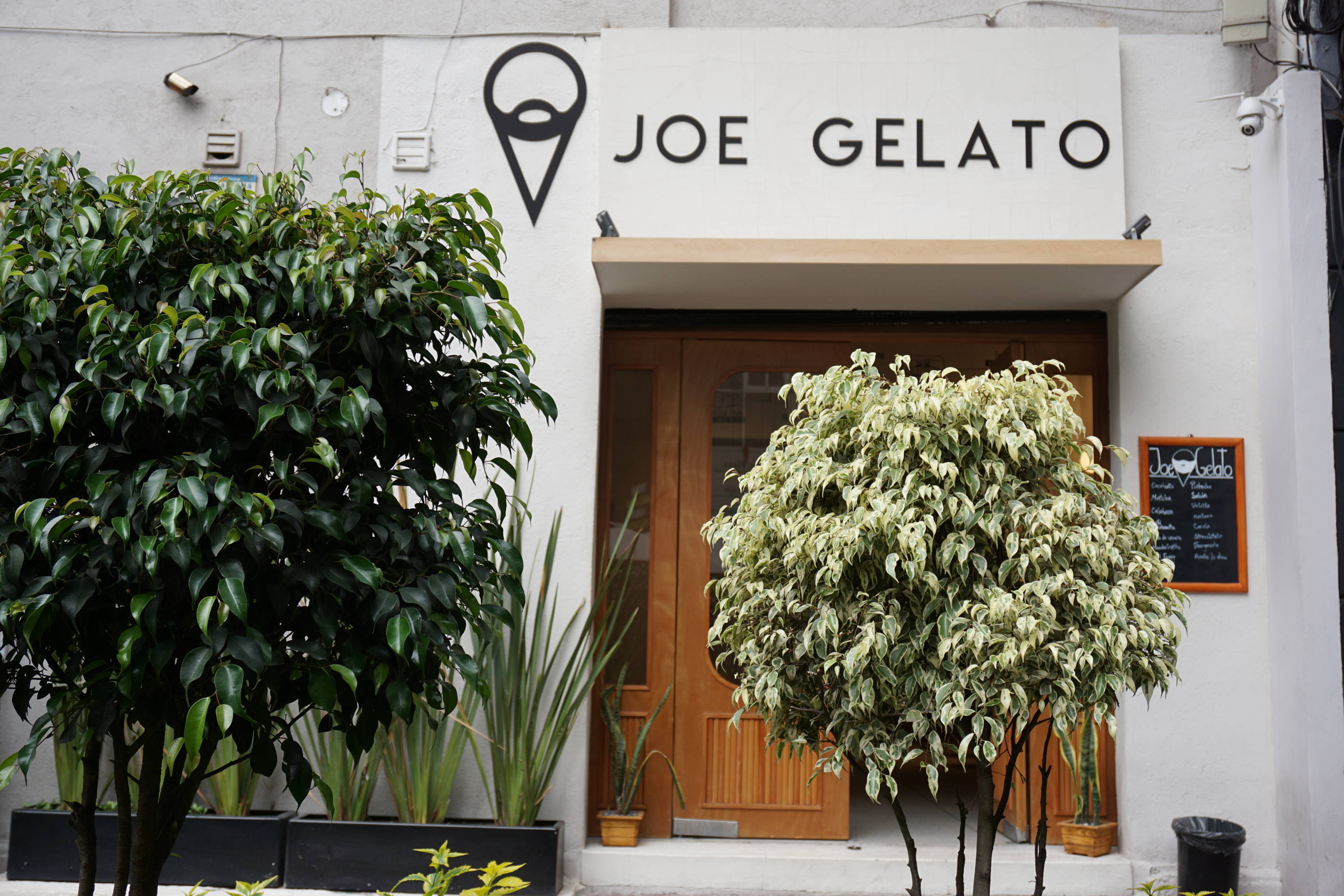 This small gelato shop makes classic Italian gelato with uniquely Mexican flavorings that change seasonally, like maíz, pinole, huitlacoche or pan de muerto (the traditional pastry made for Day of the Dead).

Sure, this is a traditional Mexican bakery with no shortage of breads, cookies and pastries born from wheat flour. But don't overlook corn-based specialties like the pastel azteca, in which saucy layers of huitlacoche, flor de calabaza (zucchini flowers) and chicken tinga are sandwiched between tortillas, similar to a lasagna. Also noteworthy: their dynamite pan de elote.
Image credit @maquecafe 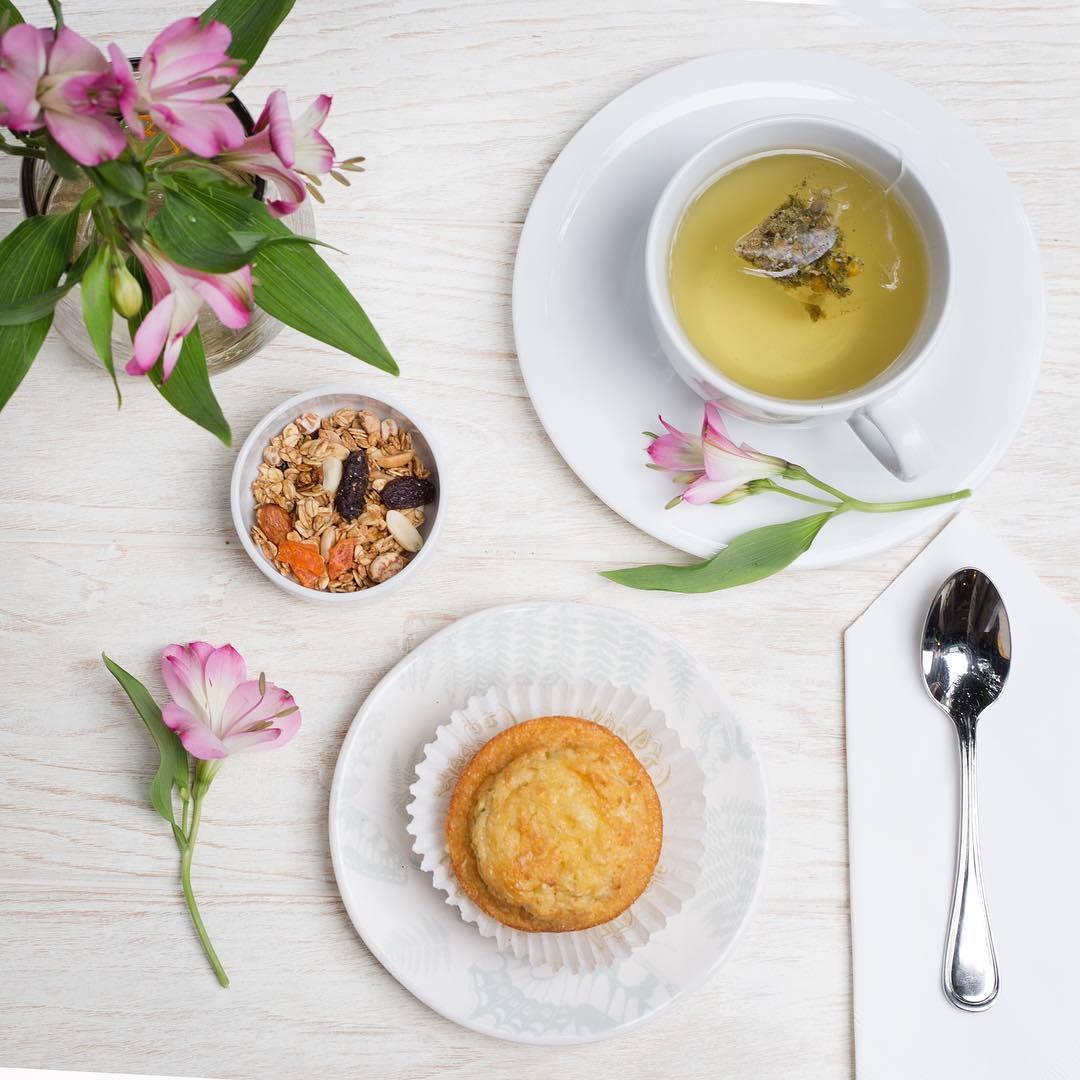 If you can’t book a flight to the district, we’ve got an extensive, ever-expanding domestic directory of purveyors who are invested in high-quality masa and heirloom corn. You’ll find some of the best Mexican restaurants in America on our Masa Map, a list that begins with US-based masa makers, but will expand to include those across the world. If you know an establishment that should be on the map or is worth including in this CDMX guide, please drop us an email at info@masienda.com with Masa Map in the subject line. If you’re looking for a list of retailers who carry Masienda goods, check out our Find Us map. Forget Duolingo: brush up on your nixtamal terminology before you touch down in the capital of corn. Add Some Pow to your Pizza (& Everything Else) with Salsa Macha

Wondering what that jar of bright-orange oil is on every restaurant table in Mexico City? Meet salsa macha. Bringing some mezcal back home? Pair it with worm salt for a traditional drinking experience.