Whether you’re just starting out on a kernel-to-masa journey or you’re a seasoned pro, you may from time to time need some nixtamal troubleshooting. Worry not — we’re here to help. In addition to the series of masa tutorials on YouTube, our in-house Molinito Maestro, Manny, is a font of knowledge when it comes to not just Molinito, our tabletop mill, but the entire nixtamal process. He was kind enough to put together this glossary of terms that defines key vocabulary words specific to the world of nixtamalización — or nixtamalization — that you can consult as you go. And if you're looking for a deeper dive, check out the book, MASA: Techniques, Recipes & Reflections on a timeless staple.

But first: What is nixtamalization?

Well, for starters, it’s one of humankind’s greatest achievements ever, right up there alongside electricity and the wheel. Without it, there is no masa, the foundation upon which civilization in Mesoamerica thrived for centuries and the backbone Mexican cuisine (among others) today. Nixtamalization refers to the process of cooking and steeping corn in an alkaline solution (typically water with slaked lime), creating a reaction that softens the corn, imparts calcium and activates the essential amino acids and vitamin B3, known as niacin, found naturally in each kernel. It's like...magic. You see, without nixtamalization, dried field corn on its own lacks significant nutritional value and isn’t that versatile. When 18th century colonizers brought corn from the Americas across the Atlantic, the recipe for nixtamal was lost and as a result, a niacin deficiency disease called pellagra became rampant. But nixtamalization isn’t just about nutrition; the process of cooking and soaking the corn creates incomparable flavor, texture and aroma.

Now, without further ado, the ABCs of Nixtamal…

Alkaline: Having a pH greater than 7 (cue flashback memories of chemistry class). In the case of nixtamal, dried corn kernels are cooked and steeped (6-12 hours) in an alkaline solution, most commonly calcium hydroxide (cal or lime) and water. The amount of cal used can affect the total pH of the alkaline solution, and thus affect the overall texture and color of your finished nixtamal. (e.g. Too much cal can turn your blue corn a greenish color.)

Activation: The process of nixtamalization activates the corn’s niacin (vitamin B3), facilitates the removal of the corn’s pericarp, helps release the corn’s natural carotenoids, thereby imparting a yellow color almost immediately, and helps gelatinize the corn’s starches to help give the finished masa its flexibility.

Aroma: The scent your nose perceives while cooking nixtamal is that of corn in its purest form. However, once you grind the nixtamal into masa for tortillas, the aroma may develop into more complex fragrances as the tortillas cook on a comal. For example, a Purple Cónico tortilla provides a distinct brown butter aroma after cooking that might have you questioning everything you knew a tortilla to be.

Cal: Also known as calcium hydroxide, cal is mixed with water to make an alkaline solution for cooking maíz (dried corn kernels), which helps remove the tough pericarp (outer layer of a kernel), allowing the kernel to absorb calcium as a nutritional benefit of the nixtamalization process. Cal also acts as a natural preservative.

Ceniza: Literally translates to ash; clean-wood ash can be used in place of cal to make an alkaline solution for cooking nixtamal. This technique was first discovered and used by the indigenous peoples of Mexico thousands of years ago.

Comal: A comal is a flat-surface pan (usually round) used to cook tortillas, and very similar to a griddle. In Mexico, traditional comals are made of clay and also used to toast spices and chiles. Comals are loved for their ability to reach and hold hot temperatures (500-700 degrees Fahrenheit), which helps create the steam and pressure needed to make a tortilla puff during cooking.

Crumple Test: Perhaps the second most satisfying test right behind the Tortilla Puff for tortiller@s, the crumple test refers to taking a recently cooked corn tortilla and crumpling it in one’s hand to examine the tortilla’s overall elasticity. If the tortilla holds its shape (e.g. does not crumble/break) then you’ve got yourself a soft, pliable tortilla strong enough to hold the taco fillings and salsas your heart desires, without fearing that your tortilla will fall apart while eating. 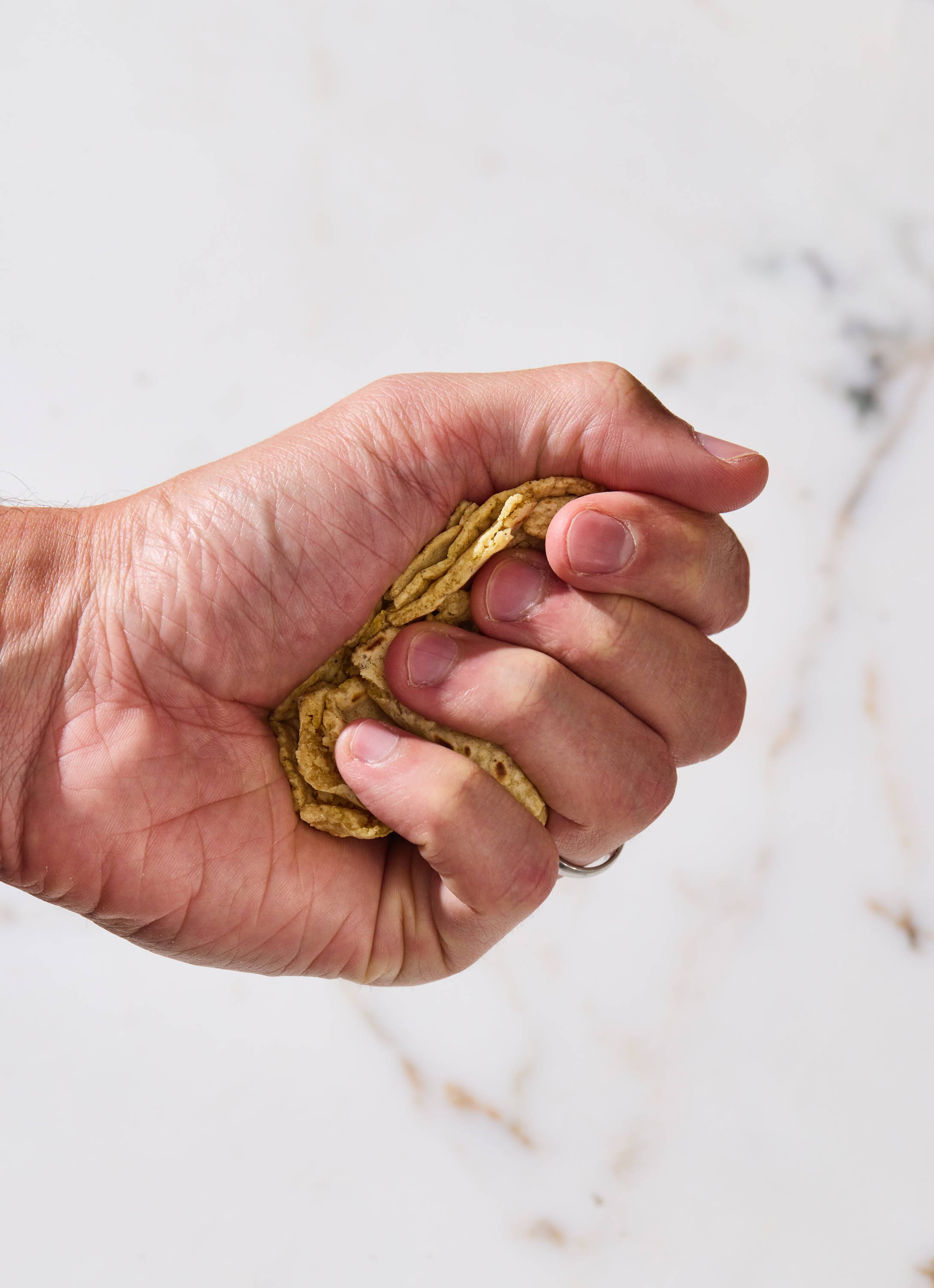 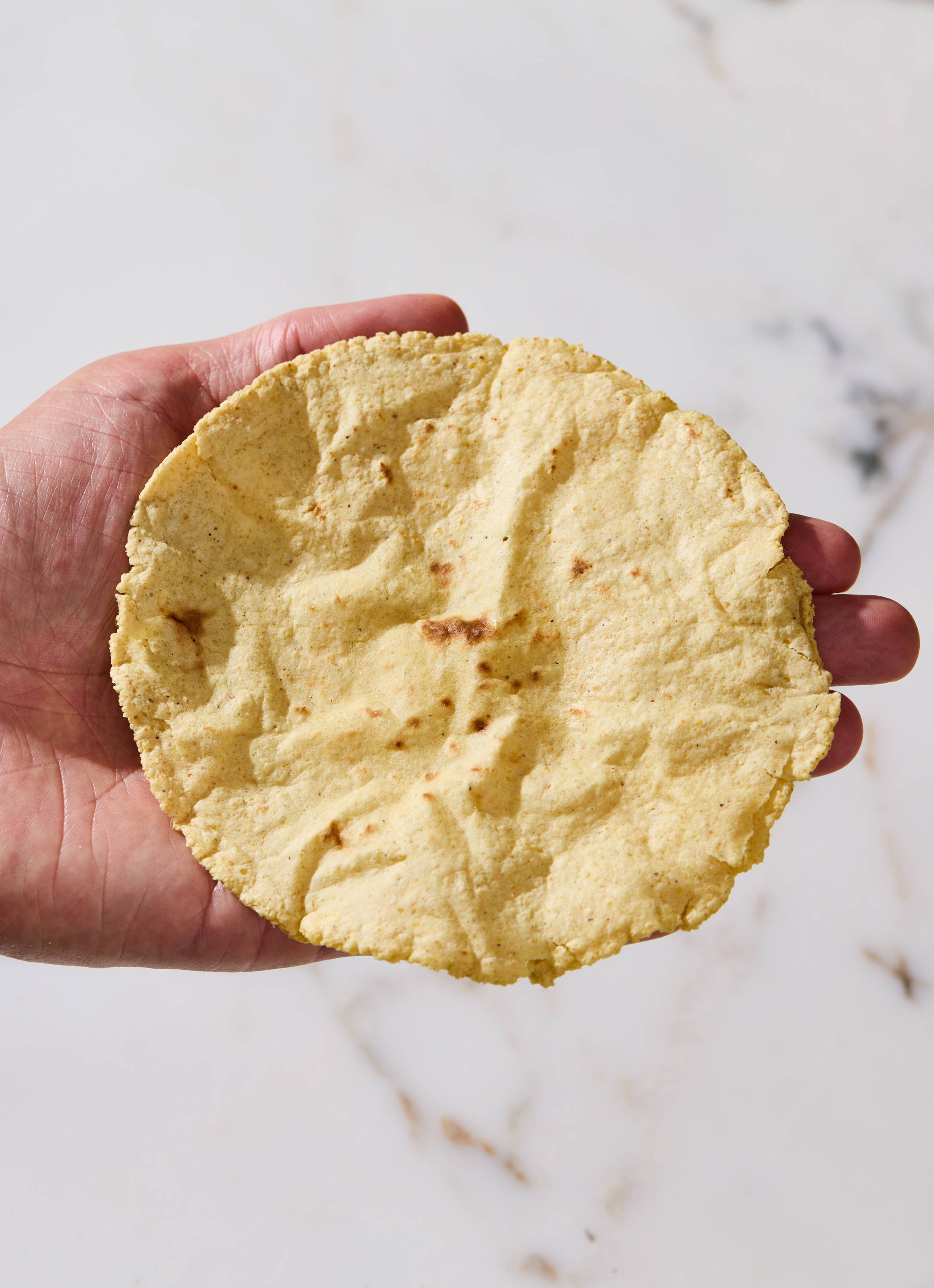 Grind: Nixtamal can be ground into a coarse masa or fine masa, depending on your desired texture and final masa shape (e.g tamal vs tortilla). Fine ground masa is typically used for soft table tortillas, while a slightly coarser grind may be used to give tamales a heartier texture, or for making a slightly thicker tortilla to be used for totopos (chips) and tostadas. In the case of the latter, the coarser grind contributes to the overall crunchiness of your finished tostadas and totopos as they will soak up less oil while frying.

Hand Mill: A manually operated, table top grain mill, usually consisting of steel plates, and can be used to grind everything from dry grains, spices, nuts & seeds, to nixtamal. When using a hand mill to grind fine masa for tortillas, be prepared to run your nixtamal through the mill 2-3 times to achieve a smooth texture. A staple in the traditional Mexican kitchen, hand mills are still used today to make other goods such as pinole (toasted dry corn ground with cinnamon to be used as a porridge or hot drink), tascalate (a drink mix of toasted ground corn, achiote, cacao, cinnamon and sugar) , and recados (marinades).

Heirloom Corn: This term refers to corn that was grown from seeds that have been passed down through generations (think hundreds, if not thousands of years), without being genetically modified. To do so, farmers save seed from their best crops with the most desired traits such as flavor, nutrition, color, and adaptability.

Hominy: Dried field corn that has already undergone the process of nixtamalization is known as hominy in some parts. It can be used for soups and stews, like pozole. We recommend Cacahuazintle for hominy stew, or pozole, but note that ours has not been nixtamalized yet, but the tip caps have been removed, so it should blossom beautifully upon cooking.

Masa: The Spanish word that translates into “dough.” In Mexican and many Latin American cultures, the word masa is used to refer to the corn-based dough that results from grinding nixtamal. Its uses go far beyond tortillas, pupusas, and arepas, as it can also be used as a thickening agent in stews, or to make delicious hot beverages (see Atole).

Metate: A pre-hispanic kitchen tool made from volcanic rock with a shallow curve for holding grains and a mano (stone shaped like a tapered rolling-pin), traditionally used to grind nixtamal into masa prior to stone mills. Using a metate can be very labor intensive, as it requires using the mano to grind the nixtamal against the stone base, traditionally in a kneeled position so as to use one’s body weight for extra grinding force. 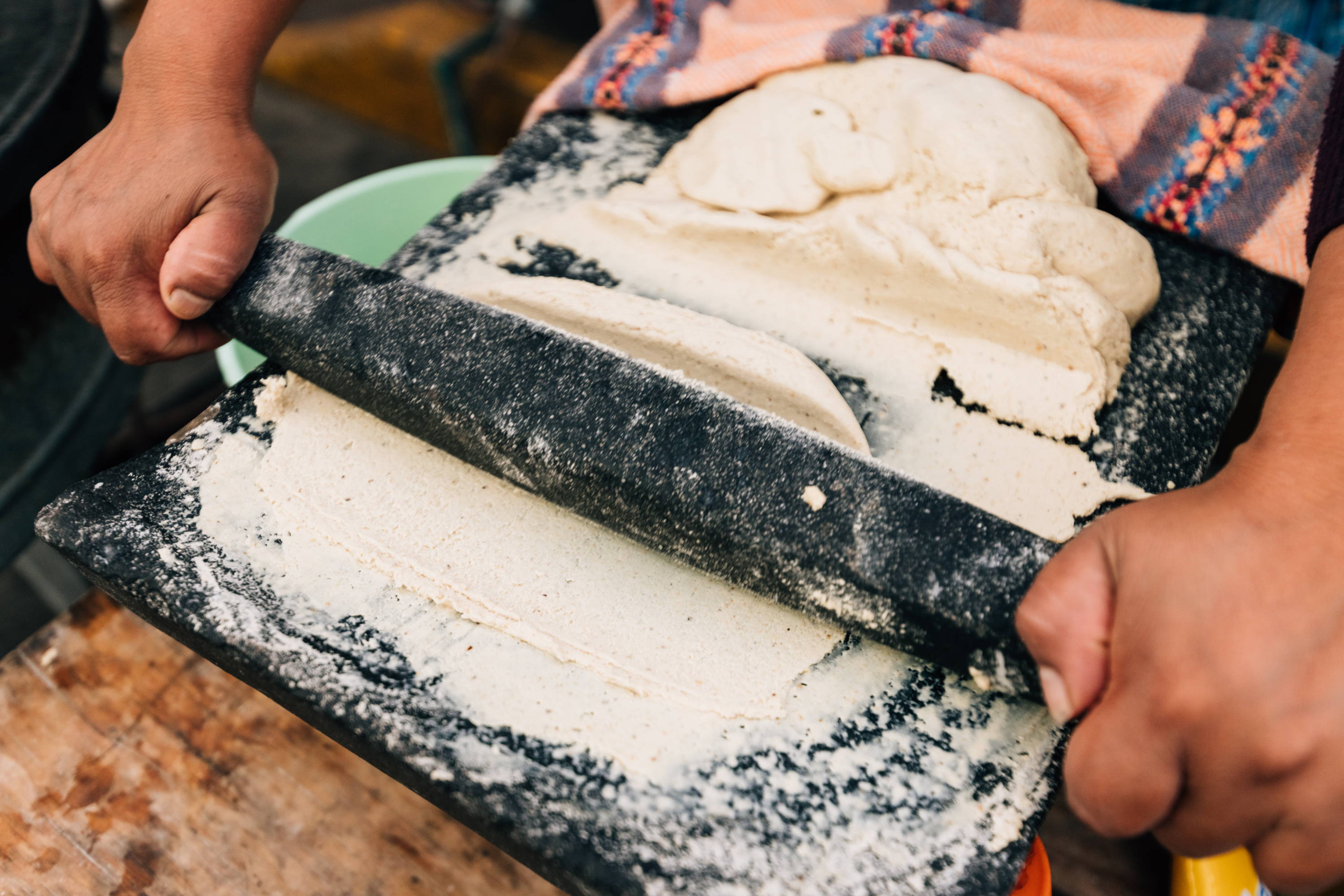 Molino (or Mill): A mill made with volcanic rock Stones used to grind nixtamal into masa. Nowadays, these stone mills are machine powered and capable of producing hundreds of pounds of masa for commercial production in a short amount of time, and significantly reducing the manual labor that a hand mill or metate would require. The best-selling Masienda tabletop mill is known as Molinito.

Nixtamal: From the Nahuatl word nixtli meaning “ashes,” and tamalli meaning “cooked maíz masa.” The resulting product of corn that has been cooked and steeped in an alkaline solution (using water and cal or water and clean wood ash), which can be left whole for pozole (hominy), or ground into masa.

Pericarp: The outer skin of a corn kernel. On a fresh kernel, it’s the thin transparent skin that gets stuck between your teeth. On a dried corn kernel (maíz), the pericarp (or bran/hull) is particularly tough and removed during the nixtamalization process. The pericarp also contains the natural gums needed to bind the stone ground masa and give it elasticity.

Pozole: A traditional Mexican soup made from a broth of braised proteins (pork, chicken, or beef) stewed with a base of chiles (think fresh/dried, red or green), and served with whole nixtamal (hominy). While nixtamal can be made with any maíz, the most traditional heirloom corn used for pozole is Cacahuazintle. 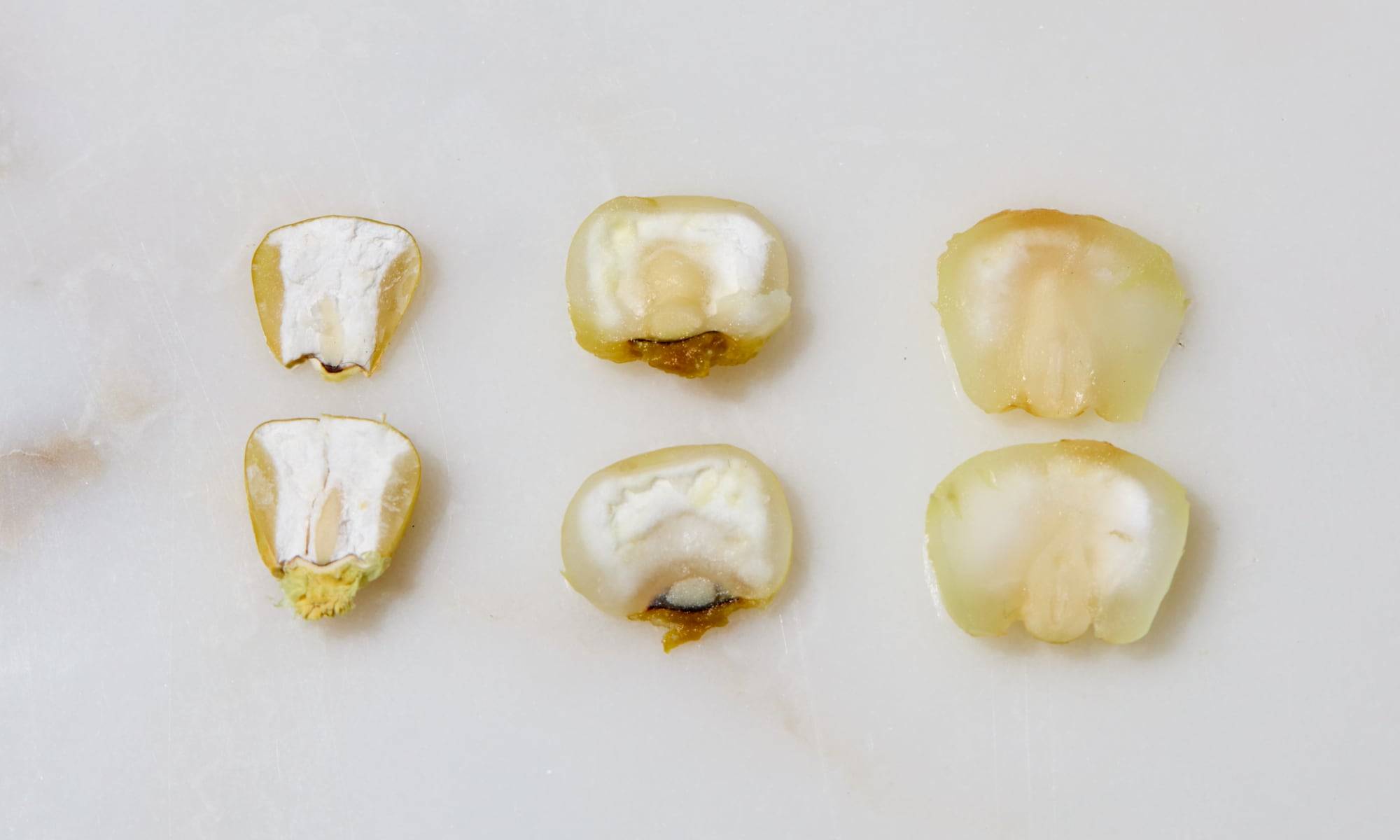 Starch Content: Each varietal of heirloom corn has a unique starch composition (endosperm), which can be made up of soft, powdery white starch (soft endosperm), and/or a crystalline starch (hard endosperm). It’s important to assess the starch content of your raw kernels prior to nixtamalization as kernels that are largely made up of soft starch will typically have a faster cook time than those with a larger ratio of dense hard endosperm.

Texture: The texture of your finished nixtamal will depend on its final application. If you're using nixtamal for pozole, then you’ll want to cook your kernels until the pericarps have fallen and the kernel is completely cooked and soft with a toothsome texture. If you're cooking nixtamal for masa, then you’ll most likely be aiming for an al-dente texture, or what some folks refer to as “medium rare,” where the outside of the kernel has softened, but the inside of the kernel still holds it white chalky texture (soft starch).

Tortilla Press: A traditional Mexican kitchen tool used to press fresh-ground masa into tortillas. Presses can vary in sizes capable of producing tortillas up to 14” in diameter or larger, and can be made from materials such as steel, wood, cast iron, or plastic. Generally speaking, the heavier the press, the more capable the press is of producing thin, even tortillas.

Wash-Off: The process of “washing off” the pericarp (skins) from the kernels of nixtamal. The amount of skins washed from the corn will provide what we refer to as the “wash-off ratio.” When making nixtamal for pozole (hominy), one might wash off 100% of the pericarp so that the hominy has a clean corn flavor and can fully bloom in the finished stew. When using nixtamal for masa, you’ll want to consider leaving some of the skins intact, as they contain natural gums that help bind the masa (note: we recommend starting with a 50% wash-off ratio).

Thanks for reading the ABCs of Nixtamal. Check out our YouTube channel for more masa inspiration.